Manila, Philippines -- With a little more than a week left before the scheduled end of the Philippines's strict community quarantine measures to slow the spread of the coronavirus, the country is expected to find out on Thursday how the government plans to transition out of the lockdown.
On Monday, President Rodrigo Duterte met former health secretaries, experts and other legislators to discuss the possibility of extending the lockdown with modifications to allow selected non-essential businesses to resume operations or to lift it entirely.

Presidential spokesman Harry Roque said “a total lockdown” had been ruled out, allaying fears that more restrictive quarantine measures would be put into place after the April 30 deadline.
Duterte is set to reveal what he plans to do on April 23.

Last month, the Philippines implemented a 30-day “community quarantine” across the entire island of Luzon, after new COVID-19 cases began to spike and the health department confirmed local transmission.

Similar lockdowns have been initiated in other parts of the country, bringing the economy to a standstill.
RJ Ledesma, an entrepreneur, saw revenue from his food business and events hosting gigs plummet to zero after the lockdown was declared.
Along with some other entrepreneurs, Ledesma started the Bounce Back Philippines Facebook page for other business owners and gig workers on how to position themselves as the pandemic continues to batter the economy.

“The biggest concern is when we can reopen the economy. We all know it’s going to have to be a balance between health and profits,” said Ledesma.
“We need to see more testing and ensure that cases are not increasing. The last thing we want is a resurgence of new infections,” he added.

Did we flatten the curve?

According to a study by the University of the Philippines, the lockdown along with other safety measures like social distancing may have reduced the number of cases by 83 percent.
“It now takes a little longer for the number of confirmed cases to double in number. What took three days for the total number of cases to double now takes about six days,” the study says.
“We have flattened the curve but what we want is to crush the curve to ensure that we have really controlled the spread of the virus,” said Eduardo Ano, interior secretary and vice-chairperson of the National Task Force for COVID19.
The World Health Organization (WHO) released conditions for governments that want to start lifting lockdown restrictions which include controlling transmission, ensuring capacity to test, isolate cases and trace contacts, minimising risks in vulnerable spaces like nursing homes and preparing communities to live with social distancing. 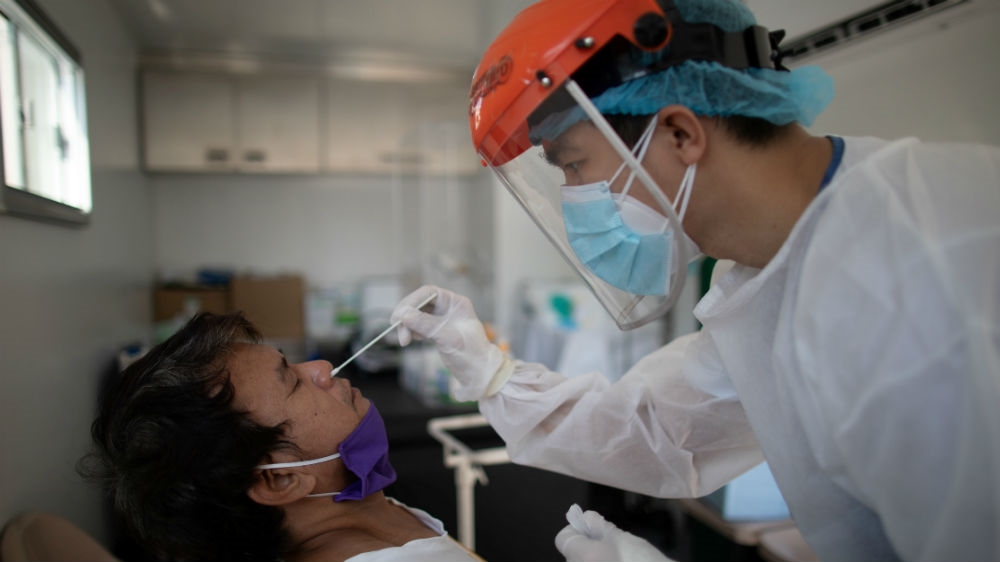 The Philippines stepped up coronavirus testing from April 14 to get a better idea of the extent of transmission [Eloisa Lopez/Reuters]
The health department rolled out a more aggressive testing programme on April 14, but for the most part, testing as a measure to contain the transmission of the virus transmission and assessing the extent of infection remains limited.
As of April 23, the Philippines had 6,710 reported COVID-19 cases. Recoveries which were pegged at 693 outnumbered fatalities at 446.

“We are not yet at a decent level of testing but the government is ramping up efforts. The goal is to keep increasing doubling time and keep reducing new cases until we approach zero,” said former health minister Esperanza Cabral.

The Research Institute for Tropical Medicine (RITM), the country’s main testing centre, announced that it would scale back its operations until April 24 after more than 40 of its staff contracted the virus. RITM was processing about half of all test kits administered.
On Wednesday, Health Under-secretary Dr Maria Rosario Vergeire said it was “too early to say” whether the Philippines had flattened the curve. “We are studying the numbers,” she said.

Some districts have taken it upon themselves to augment the health department’s testing capacity. Valenzuela City, about 14 kilometres (8.6 miles) north of the capital of Manila, was the first to roll out a localised mass testing programme early this month.
“After the lockdown, we were running around in circles trying to contain the spread of the virus. People were getting infected but there were not enough test kits and processing of test results was slow,” said Rex Gatchalian, mayor of Valenzuela City.

Gatchalian has been vocal in pointing out the health department’s sluggish response to the health crisis.
“I think they underestimated the pandemic,” he told Al Jazeera.
As the local chief executive, Gatchalian said on top of controlling virus transmission, his urgent concern was how to sustain food and economic relief for marginalised constituents if the lockdown were extended beyond April 30.
“For other emergencies that we have encountered like typhoons, there is a template already. But there is no playbook for handling this pandemic.”

As in so many other countries around the world, officials are walking a tightrope between restarting the economy and safeguarding public health.

“The economy is also in the ICU. It needs the financial equivalent of a ventilator,” said Ralph Recto, former socio-economic planning chief.

Wendy Cerna’s husband lost his job selling noodle soup when the lockdown was declared more than a month ago. Then last Saturday, they lost everything.

A fire that probably started from a short circuit razed their urban slum neighbourhood of HappyLand in Manila leaving about 450 families homeless.
For days now, Cerna, her husband and their two young children have been staying in a basketball court converted into a temporary shelter.
“Virus? Can you really think about that here?” asked Cerna as children scampered about, zigzagging around the mats and cardboard that mark each family’s living area.
Social distancing is impossible in the shared space and the need to wear a mask is forgotten when the priority is to be among the first in line for relief goods.

Cerna wishes that the lockdown would end but she is unsure if that would make a difference in her life. The threat of the virus would still be there and normal life is unlikely to restart. There is no money to rebuild, no stores open to buy construction supplies and no school open for her children.
“To be honest, I don’t know the latest news about the lockdown,” she said. “We lost our TV and everything we own in the fire.”
SOURCE: Al Jazeera News

Posted by Terrobuster at 1:10 AM