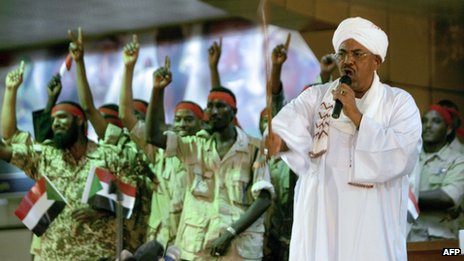 President Omar al-Bashir said the people of South Sudan needed to be liberated
Sudan President Omar al-Bashir has said his main goal is now to "liberate" the people of South Sudan from its rulers following recent border clashes.
The former rebel Sudan People's Liberation Movement (SPLM) has ruled South Sudan since it seceded from Sudan in July 2011.
President Bashir described the SPLM as "insects" that needed to be eliminated.
Fighting between the two countries has now spread to another area, further adding to fears of all-out war.
South Sudan seized the Heglig oil field - generally recognised as Sudanese territory - eight days ago. On Tuesday fighting broke out north of Aweil in South Sudan, about 100 miles (160km) west of Heglig.
The South Sudanese military said 22 soldiers had been killed, with casualties on both sides.
'Disease'
Mr Bashir told a rally at his party's headquarters that the SPLM needed to be removed.
"We say that it has turned into a disease, a disease for us and for the South Sudanese citizens. The main goal should be liberation from these insects and to get rid of them once and for all, God willing."
The reference to insects is an apparent play on the SPLM's Arabic name.
He told the crowd that his message to the SPLM was: "Either we end up in Juba and take everything, or you end up in Khartoum and take everything."
The BBC's James Copnall in Khartoum says the comments sounded like a declaration of war.
President Bashir also predicted that "within a few hours you are going to listen to good news from your brothers in Heglig".
Sudan army officials made similar comments when they started a counter-attack on Friday.
After President Bashir made his comments a South Sudan minister called for negotiations. "We can only resolve this through talks with the African Union," Minister of Information, Barnaba Marial Benjamin, told Agence France-Presse.
On Tuesday international envoys to Sudan told the United Nations Security Council that both sides were "locked in the logic of war".

The current spate of fighting is the worst since South Sudan's independence last year, which followed two decades of civil war between Mr Bashir's government and the SPLM.
A Sudanese foreign ministry official said Sudan would end the occupation of Heglig "by hook or crook".
Our correspondent says civilians in both Sudan and South Sudan are volunteering to join paramilitary forces.
But he says others are involved in protest movements, saying they do not want this war against people who were recently their fellow citizens. They feel bad leadership has led them to the verge of all-out war.
A non-Sudanese source close to the border talks told the BBC that during years of discussions before its independence, South Sudan never claimed Heglig as part of its territory.
In a separate development, the world's newest country became a member of the World Bank and the International Monetary Fund on Wednesday.

James Copnall BBC News, Khartoum
President Bashir's speeches can be divided into two categories. In the first he reads a pre-prepared speech, and sticks to it. In the second, he improvises - and often takes a much harder line.
This latest effort clearly fits into the second category. If the President acts on his words, Sudan and South Sudan are at war.
The essential messages - that he intends to get rid of the SPLM, and what started in Heglig can only finish in Juba or Khartoum - can mean only this. President Bashir may calculate that in difficult economic times he needs an external enemy to unite the nation behind.
But the Sudanese Armed Forces are already overstretched. They haven't been able to fully overcome rebellions in Darfur, Southern Kordofan and Blue Nile, and they also failed to hold onto Heglig.
South Sudan is also less well equipped militarily than Sudan, and shutting down its oil resources deprived it of 98% of its revenue.
All out war would be disastrous for both, but that is the direction they are heading.


Main disputes between the two Sudans