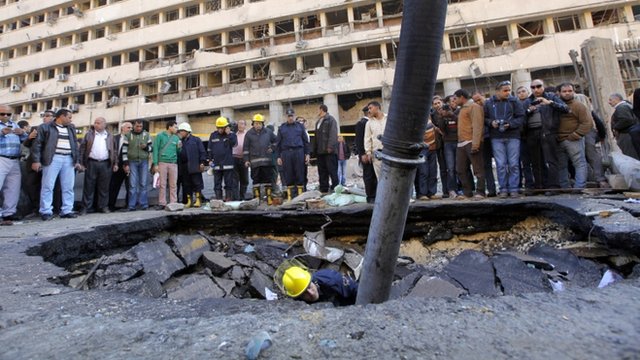 Orla Guerin at the scene of one of the attacks: ''A huge crater was left after the blast''
Five people have been killed and about 90 wounded after three blasts in the Egyptian capital that appeared to target the police force.
The attacks began with a powerful car bomb that exploded outside the police headquarters in central Cairo, killing four people and wounding at least 76.
Within hours, two other blasts occurred elsewhere in the city, killing one person and injuring 15.
The attacks come on the eve of the third anniversary of the 2011 uprising.
The revolution forced the country's decades-long ruler Hosni Mubarak to resign.

An al-Qaeda-inspired militant group Ansar Beit al-Maqdis (Champions of Jerusalem) has said it carried out the attack on the police headquarters.
The group previously claimed responsibility for a car bomb attack on a security building in the northern city of Mansoura in December that killed 16 people and injured more than 100 others.
The authorities blamed the Muslim Brotherhood for that attack - something the group strongly denied - and declared it a terrorist group shortly afterwards.
An angry group gathered outside the bombed police headquarters, accusing the Islamist movement of being behind Friday's attacks. Some shouted "Death to the Muslim Brotherhood".
The Muslim Brotherhood condemned what it called the "cowardly bombings".
Tense time The police headquarters was hit by a powerful blast at about 06:30 local time (04:30 GMT). Black smoke could be seen rising over the city soon after.
Egyptian Interior Minister Muhammad Ibrahim said it appeared to be the work of a suicide bomber.
"A pick-up truck had two passengers inside, stopped outside the security cordon, and the suicide bomber blew himself up," he said. 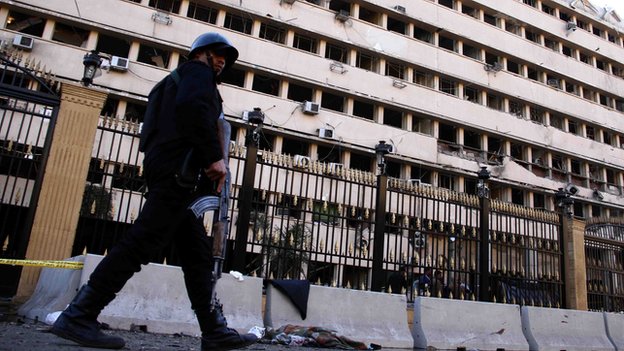 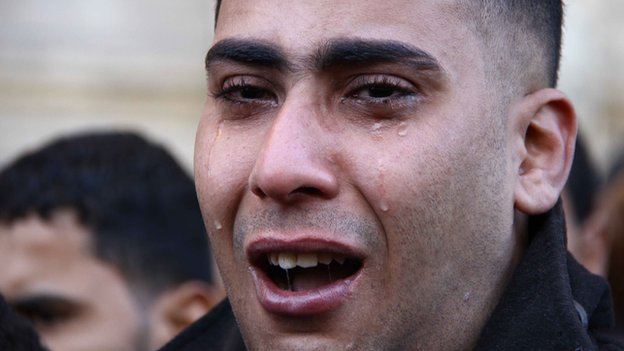 The first attack was the deadliest, killing four people and wounding more than 50 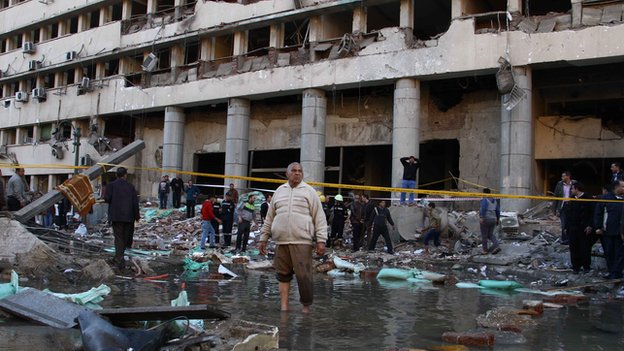 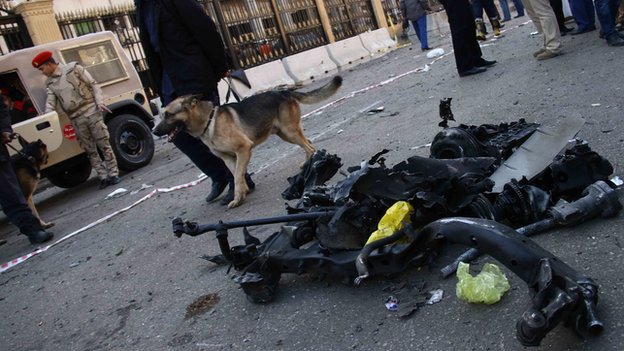 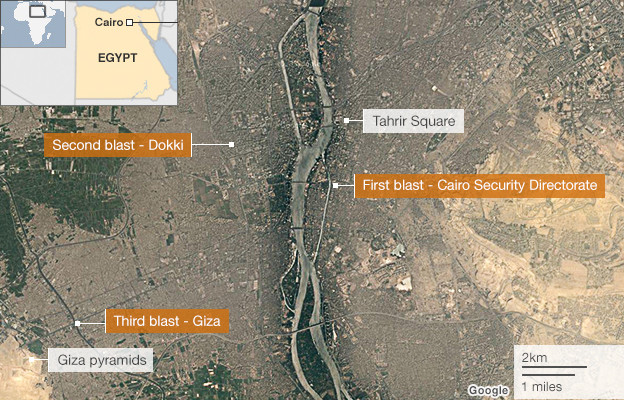 Gunfire was reportedly heard soon after the blast, and more than 30 ambulances raced to the scene.

The blast left a huge crater and caused extensive damage to the front of the building.
The nearby 19th Century Islamic art museum was also damaged. "The building has been destroyed form the outside, but with regards to the antiquities we'll have to wait and see until we can carry out a thorough inspection," said Antiquities Minister Mohamed Ibrahim.

The BBC's Orla Guerin, reporting from Cairo, says the security directorate is a very significant target and should have been one of the best protected buildings in the city.
As people in Cairo were taking in news of the blast, a second explosion occurred in the Dokki district of the capital.
One person was killed and 15 were wounded in a blast that, according to one report, targeted police vehicles near the metro station.
A short while later, officials said a third device had been set off beside a police station near the famous Giza pyramids. No-one was hurt.
The attacks come at a tense time, with security forces already on heightened alert ahead of the anniversary of the start of the uprising against Mubarak, our correspondent says.
The interior minister said security is being stepped up around the squares where people are expected to gather to mark Saturday's anniversary.
"We have a plan to secure all of this for the anniversary of the 25 January revolution," Mr Ibrahim said. "I am telling the people not to be afraid and go down."
Conditions The Muslim Brotherhood and its partners had been planning demonstrations after Friday prayers across the country. It was not clear if they would go ahead.
Supporters of the Muslim Brotherhood are angry at the army's overthrow of Islamist President Mohammed Morsi last July - a year after he became Egypt's first democratically elected leader.
Although the group has now been banned, interim Prime Minister Hazem Beblawi said any member could take part in forthcoming elections under certain conditions.
"He accepts the new constitution... refuses the use of force and he accepts the idea of a secular government, democratic one, open, no discrimination, no mixing of religion and politics, and accepting human rights," Mr Beblawi said in a BBC interview before the attacks.
Amnesty International on Thursday condemned the military-backed government's period in office as one of "unprecedented" violence. It accused troops of regularly committing abuses and said rights and liberties in the country were being eroded.

Posted by Terrobuster at 4:13 AM