A large convoy of lorries and taxis packed with Muslims fleeing Christian vigilantes headed north from Bangui under a slew of insults from angry residents, locals said.
The mob set on the victim after he fell off one of the lorries and hacked to pieces his body, which still lay by the side of the road by late morning, an AFP photographer saw.
Armed Christian "anti-balaka" fighters tried to attack a second vehicle in the convoy, but they dispersed when troops from an African peacekeeping force, MISCA, fired warning shots.
Muslim Central Africans and foreigners have been fleeing Bangui for several months to escape killings, looting and harassment by armed militias drawn from the Christian majority in the city, in defiance of calls for peace by religious leaders.
The lynching comes just two days after uniformed Central African troops attacked a Muslim right after a military ceremony in Bangui, stabbing and stoning him to death.
UN envoy to the CAR Boubacar Gaye condemned the climate of impunity that allowed "a man to be attacked in broad daylight and his body desecrated."
Defence Minister Thomas-Theophile Timangoa told the country's transitional parliament Thursday that a probe had begun into the lynching and that human rights experts had been asked to help.
'Left to fend for themselves' 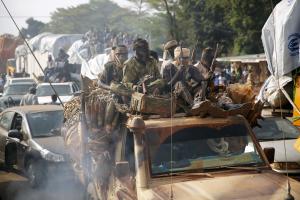 At PK12 Chadian troops escort thousands of Muslim residents from Bangui and Mbaiki, fleeing the Cent …

Thousands of Muslims have been fleeing Bangui in fear for their lives as they face vengeance attacks from Christian militia in a spiralling cycle of religious violence.
The violence was sparked after the Seleka rebel group installed Michel Djotodia as the country's first Muslim president in a coup in March 2013.
The following months saw rogue Seleka fighters unleash a wave of atrocities against Christians, prompting the emergence of "anti-balaka" (anti-machete) militia who began launching revenge attacks.
In Geneva, UN refugee agency spokeswoman Fatoumata Lejeune-Kaba said Friday that 8,762 people, have crossed into eastern Cameroon in the past 10 days alone, mainly Muslims "who say they feared for their safety".
While many Muslims try to flee Bangui, others seek safety near the capital, abandoning towns and villages in the provinces where they come under attack.
Up to 4,000 Muslims have taken refuge at the Bangui airport, near the bases of French and African troops, and hope to leave the country in the next few weeks.
French Defence Minister Jean-Yves Le Drian, who is due in Bangui on February 12, said in an interview Thursday that an extension of the current UN mandate for France's 1,600-strong contingent was "likely".
New interim president Catherine Samba Panza -- who took over in January after Djotodia was forced to resign -- has asked the UN for a full-fledged peacekeeping operation.
She said the French and some 5,000 African "forces do not have enough men to reestablish and assure the security of the people".
Samba Panza's government faces a massive task in restoring peace, with the territory outside the capital largely lawless and in the hands of warlords.
Atrocities, the fear of attack and a lack of food have displaced almost a quarter of the country's population of about 4.6 million, while the UN and relief agencies estimate that at least two million people need humanitarian assistance.
"Civilians remain in constant fear for their lives, and have been largely left to fend for themselves," the emergency coordinator for Doctors Without Borders (MSF), Martine Flokstra, said Friday.
"In the northwest and in Bangui, we are currently witnessing a direct retaliation against the Muslim minority," she added in a statement.
"We are concerned about the fate of these communities trapped in their villages, surrounded by anti-balaka groups and also about the fact that many Muslim families are being forced into exile to survive."