India
By Menaka Rao Mumbai
Last month an Indian court convicted 12 men for their role in the 2006 Mumbai train blasts which killed 189 people, and also acquitted Abdul Wahid Shaikh, a schoolteacher in south Mumbai. Menaka Rao met Mr Shaikh to find out more about what life has been like since his acquittal.
Exactly a month after he was released from the Arthur Road jail, 37-year-old Abdul Wahid Shaikh returned to his job as a science teacher in the Abdus Sattar Shoaib School on Grant Road.
"We sought the opinion of our legal officers and took him back. The state government has to now clear the papers related to his salary, because they provide the funds," Dr Zahir Qazi, president of Anjuman-i-Islam trust, which runs the school, told the BBC.
"We do not go by prejudices. We warmly welcomed a person who was wronged and needs to support his family," he said.

"One of my colleagues joked, 'You were better off in jail. These children are devils. We are totally fed up. They will sit on your head and grind masala [an Urdu phrase which means "to torment someone"]," Mr Shaikh told the BBC, laughing.
He said he had received overwhelming support at the school and had not faced the prejudice an ex-inmate would usually encounter. 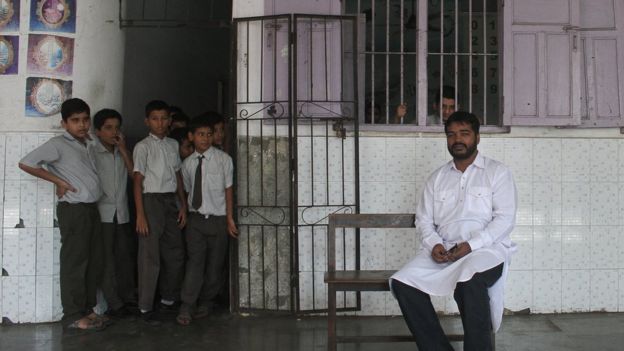 "My students are thrilled that their teachers' photo was published in prominent English and Urdu papers. I have not heard of any negative reaction from the parents either. Not one person called me a terrorist after I got out."
He now aims to establish himself as a "strict, no-nonsense" teacher among his students.

But Mr Shaikh did face some challenges on his first day back. Most of the students in his class were drowsy and three were fast asleep, he told the BBC.
"When I asked what was wrong, the children told me that they played games on the computer or mobile until about 12am or 1am. Some told me they were up until 4am. How can they keep their eyes open if they are sleeping only for a few hours and turning up at 7am?" he said.
The ubiquitous touch-screen phone is just one of the things that is new in Mumbai since Mr Shaikh's arrest in 2006. The city also boasts more flyovers, a metro line, and a monorail.
Only the train network he was accused of attacking is still familiar to him. "I still know how to behave in the crowded trains, the self-imposed rules are still the same," he said.
Another challenge for him is negotiating the dynamics of family life.

Mr Shaikh's children, 11-year-old Umar and 10-year-old Umrah, were infants when he was arrested. When his wife - who also works as a teacher but didn't want to be identified for this report - would bring them to court, he would gift them flowers, hand-made cards and chocolates, all of which have been safely preserved over the years.
"My children have different expectations from me. If I shout at them [when they are not obedient], they feel very bad and cry a lot. It is not the same when their mother talks to them sternly. They expect me to only love them," Mr Shaikh said. 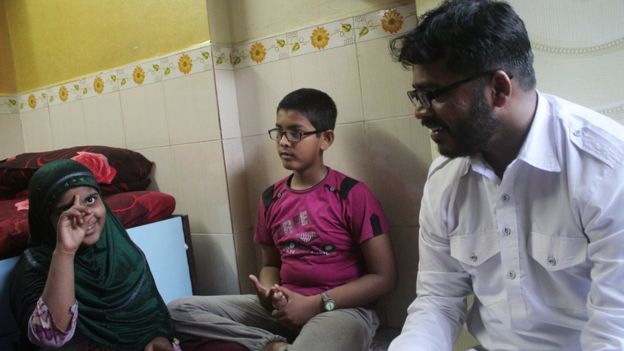 His wife began working as a teacher soon after his arrest, despite opposition from him and his family.
"In our community, women don't usually work," he said.
Once he has settled down at the school, Mr Shaikh says they will decide whether she will continue to work.
His wife agrees: "It's double the work for me as I have to complete work at home and then rush to school."
When asked if he is happy to have his father back home, Umar said, "No. I would have been happier if my uncle was also released."


'They are all innocent'

Their uncle, Sajid Ansari, was sentenced to life imprisonment in the same case.
Mr Shaikh says he can't stop thinking about his "brothers" - the other 12 people convicted in the case and who remain in jail.
"Whenever I have something which is not available in jail, like meat or aerated drinks, I think of them. I am happy I am out of jail, but if all of them were acquitted, it would have been great. It is not just me who is innocent, all of them are," he said.
Mr Shaikh is now studying to be a lawyer and says he wants to help the others overturn their convictions. 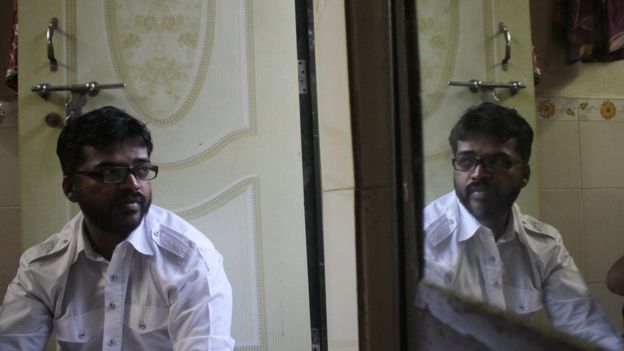 He often speaks of the torture he suffered in detention.
"When you are in an anda cell [egg-shaped high-security prison cell] with just two others, it can get on your nerves. I couldn't bear it once, and I had to go for psychiatric treatment."
Mr Shaikh's wife says they are careful around him after his return from prison.
"He tries to look happy, but is definitely more irritable, and often tense. He talks about something and suddenly his train of thought will switch over to jail and the others who are convicted now. We have to tread carefully," she said.
Menaka Rao is a freelance journalist based in Mumbai
http://www.bbc.com/news/world-asia-india-34578701
Posted by Terrobuster at 9:11 PM