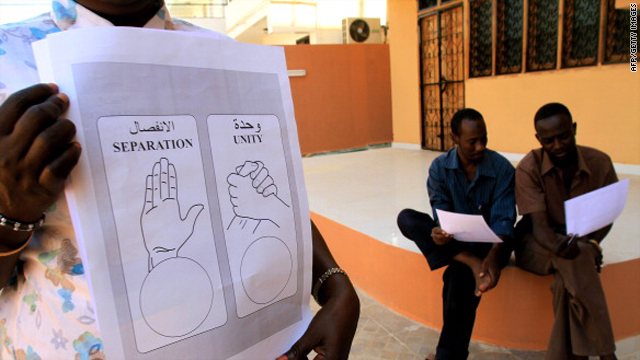 Sudanese look at an example of ballot slips at the Southern Sudan Referendum Commission offices in the Sudanese capital Khartoum on November 14, 2010.
STORY HIGHLIGHTS
(CNN) -- Voter registration begins in Sudan on Monday for a January referendum that would allow the country's autonomous southern region -- which holds a majority of the nation's oil -- to secede from the north.
A United Nations panel has arrived in the East African nation to monitor the 17-day registration effort, which will take place at 3,000 sites across the country and in eight countries abroad, the U.N. said.
"We know that organizing voter registration has not been easy, given the country's size and the scale of the process, but we remain confident that it can be completed successfully," Benjamin Mkapa, chairman of the U.N. panel and a former president of Tanzania, said in a statement Sunday.
The referendum is part of a 2005 peace agreement, which ended the two-decade conflict that led to the deaths of 2 million people in Sudan.
It is considered a possible make-or-break event for the peace accord. And the vote also could be a key factor as U.S. officials weigh whether to remove Sudan from its list of state sponsors of terrorism.
Earlier this month, the Obama administration told Sudanese officials that the U.S. would drop the country from the list in mid-2011 if President Omar al-Bashir's government recognizes the results of the secession referendum, senior State Department officials said.
Observers fear all-out war between the Khartoum-controlled north and southern Sudan if the government is perceived to have undermined the voting or refuses to accept the result.
Darfur, in western Sudan, has been beset by conflict since 2003 after rebels began an uprising against the Sudanese government.
To counter the rebels, Arab militias with ties to the Sudanese government went from village to village in Darfur, killing, torturing and raping residents there, according to the United Nations, Western governments and human rights organizations. The militias targeted civilian members of tribes from which the rebels drew strength.
The United Nations estimates that 300,000 people have been killed in the conflict in Darfur, and 2.5 million have fled their homes. Sudan denies the death toll is that high.
A recent renewal of violence between the Sudanese government and armed movements has sparked concern among U.N. peacekeepers, said Ibrahim Gambari, who heads the United Nations-African Union peacekeeping force in Darfur.

"I call upon all parties to refrain from further offensive military action and respect international humanitarian law," Gambari told reporters Sunday, according to a statement released by the U.N.
CNN's Yousuf Basil and Catherine E. Shoichet contributed to this report.
Posted by Terrobuster at 10:01 AM