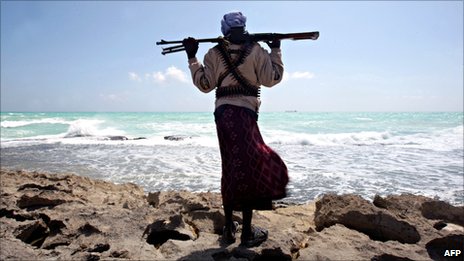 Kidnapping the Chandlers caused the pirates many headaches
The couple from Tunbridge Wells in Kent are on their way home and will no doubt be celebrating, as will be their family and friends.
So, too, is the large Somali expatriate community, especially those in the UK.
But who is to thank for the release of Paul and Rachel Chandler after 338 days in captivity?
Many people played a part but none so more than the UK's Somali community, keen to avoid more negative headlines.
People who were involved in securing the couple's freedom have told the BBC that the ransom demand was met by a few Somali Good Samaritans along with the Somali government.
Warlords and pirates
When their kidnap was first confirmed on 23 October 2009, Somalis living around the UK were worried - for the Chandlers but also about what the rest of the British population would think of them if anything happened to the elderly couple - Paul is 60, while Rachel is 56.

Stop the pressure, you're annoying us. All we want is the money”

End Quote Ali Gedow Pirate spokesman
"If the poor old couple were killed, can you imagine how bad it would be?" asked Ridwaan Haji Abdiwali, a presenter for the London-based satellite Somali channel, Universal TV.
He was one of those who organised the Somali diaspora to show its support for the Chandlers.
The Somali community is no stranger to bad press.
Mention the name Somalia and for many a fearful and suspicious vision of warlords, pirates, terrorists, gangs and police-killers is conjured up.
And the diaspora knows it only too well.

A calling
The total Somali population in the UK was estimated at 101,000 in 2008, although many believe the true figure is closer to 250,000.
The majority were welcomed to Britain as refugees in the 1990s. 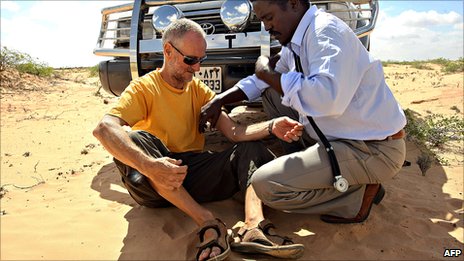 British Somalis worried for the couple's wellbeing, knowing the harsh conditions
Although most still dream of returning home, until peace comes to their war-ravaged and lawless homeland they remain stuck in places such as Wembley, Bristol and Birmingham.
For now though, the UK is home, and because of that, the community felt a calling to help out.
"It began as a sort of a feeling that we have among the community in Britain because we are British but because we come from Somalia," Mr Abdiwali told the BBC.
And also because "it is in our culture of the Somalis to look after the elderly people."
Beneath their negative image is a humble and closely-intertwined - some may say insular - community where trust is king.

'The poor old couple'
Many joke that as a Somali you are automatically an activist and entrepreneur.
It is these qualities that drove the community elders and leaders to spring into action, organising meetings and rallies. 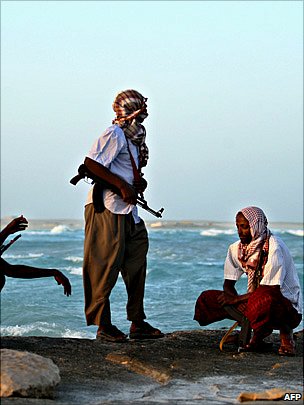 The pirates were paid by a few 'Good Samaritans' and the Somali government
The campaign to free "the poor old couple" was born.
Mr Abdiwali dedicated his Have Your Say TV programme to the issue and it became an arena for the community to vent their anger and drum up support.
"People were phoning into the studios demanding their release. There was big pressure. People were very angry.
"I also interviewed Ali Gedow [the spokesman for the pirates who were holding the Chandlers]," he recalled.
"I gave him a very hard talk, asking: 'Why are you holding this old British couple? Do you believe that you will be paid if you kill or humiliate the life of old people? What food do you give them?' I asked him all these things. And every week we called him up."
The UK-based Somalis used their strong ties to their families back home and the clan structure which lies at the heart of Somali society to exert pressure on the pirates to free the Chandlers.
This led Mr Gedow to phone up Mr Abdiwali and complain: "Stop the pressure, you're annoying us. All we want is the money."
Authority in arguing
One man who played an enormous role from within Somalia was Dr Abdi Mohamed Elmi Hangul. 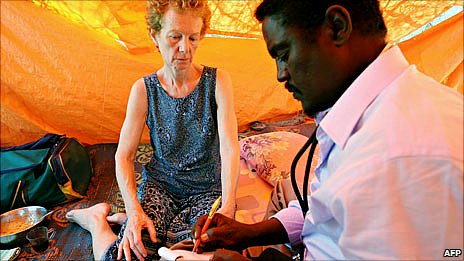 Dr Hangul was instrumental in arguing for the couple's release
He is based at Mogadishu's Medina Hospital but over the last eight months of the couple's 13-month ordeal, he travelled back and forth to where they were being held captive in Adado, central Somalia, near the Ethiopian border.
"I was contacted by the gang leader and advised to go to that place and sometimes I was organised to take things from Nairobi to Adado," Dr Hangul explained, adding, "during the situation, I was there for five days every two weeks."
And because of his medical standing, he was an authority in arguing for their release.
"Mentally, they were not well," Dr Hangul said.
BBC Somalia analyst Mohamed Mohamed said that as well as coping with being held hostage, the couple would have had to deal with the extreme heat of the Somali scrubland, where "trees are few" and "crawling things are plenty".
He said water must have been scarce and never clean - they would not have been able to wash regularly and so must have also itched terribly.
'The amount was not high'
Dr Hangul agreed that the couple's freedom was down to the efforts of Somalis around the world:

You know what those guys [pirates] are like. They are just after the money. They are not respecting human life”

"We have done a lot of work. We mobilised all the elders and finally we reach our target. I know because we are always talking to the guys [pirates], agreeing everything."
So when did the doctor know the couple were going to be freed?
"I prepared to go last week."
He also confirmed that a ransom had been paid; adding that he had contributed a sum to the final figure.
And when asked if the amount paid to the pirates was around $300,000 (less than £200,000), Doctor Hangul agreed, saying, "the amount was not high."
Normally, the ransoms paid to Somali pirates run into the millions.
'Just after the money'
The pirates' initial demand was $7m (£4.4m).
However this sum gradually decreased as a result of the pressure which was being applied to the pirates by Somalis at home and abroad.
Another reason for the substantial decrease in the ransom demand was that there was no foreign involvement - the negotiators, lawyers, shipping companies, security and insurance firms which normally take part in the whole process, each taking their cut.
The doctor also confirmed rumours that a payment of about $300,000 had been made to the pirates in June.
He said the money had come from a relative of Rachel Chandler but the pirates had not honoured the couple's release. "You know what those guys are like. They are just after the money. They are not respecting human life," Dr Hangul said.

Ashamed
Someone else who played a lead role in winning back the Chandlers' freedom was British Somali businessman Dahir Abdullahi Kadiye - the man the British media are fondly calling the London cabbie, because he used to own a taxi firm. 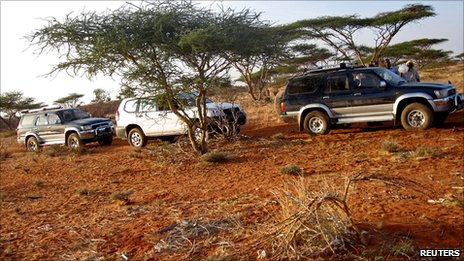 Many people played a part in winning back the couple's freedom
Mr Kadiye held a lot of sway in the negotiations because he comes from the same sub-clan - Sulieman - as the pirates [who were holding the couple].
When asked why he had been motivated to help, he told the BBC's Somali Service reporter in Mogadishu, Mohamed Moalimuu, that he "had felt ashamed that young men in my country were holding innocent old people from my second country, Britain, as hostages".
But asked about reports of a ransom, Mr Kadiye replied: "I can confirm you that no penny was paid."
Instead, he said, "this endeavour came after a joint effort of many Somali communities and I would thank those who took an active role including Somali government officials, administration of Adado and local elders".

Al-Shabab threat
Africa Research analyst Omaru Sisay said he was not surprised that the Somali government had contributed to the process.
"Any threat of an al-Shabab attack on the area the Chandlers were being held in would certainly have been a motivating factor in pushing negotiators to agree a ransom.
"In April, their captors were forced to move them at short notice amid reports al-Shabab had sent a team to take them," Mr Sisay said.
"Pirates are driven by ransom and have an interest in making sure captives are kept alive. Al-Shabab however is an ideological organisation; money may not be enough to get any Western hostages they have freed." 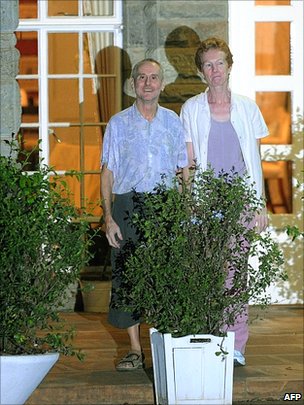 The Chandlers said they will return home "very soon"
Although stories of what really happened during the Chandlers' 13-month ordeal will continue to emerge for some time, for the moment it seems as though all sides have emerged from this case with something.
Most importantly, the Chandlers once again have their freedom.
The British government has stuck to its policy of not paying ransoms, while bloodshed has been avoided.
And the UK-based Somali community has managed to avoid a new wave of hostile headlines.
And the pirates?
They may well be reflecting that kidnapping an elderly couple from Kent and keeping them hostage for 13 months was not worth whatever ransom they received - after it was divided between them and costs deducted.

Posted by Terrobuster at 3:42 AM