BBC From Our Own Corresponden 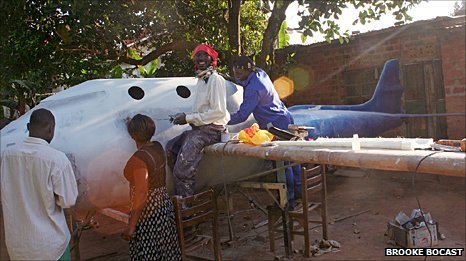 It would be easy to laugh at Chris Nsamba, founder of the African Space Research Programme.
For a start, his research centre is based in his back garden where there's not much evidence of the type of sophisticated tools and machinery I'd imagine you need for this kind of work. When I was there, most of the engineers were equipped with just sandpaper and paint brushes.
They haven't even started work on the shuttle yet, at the moment it's more of a theoretical project.
They have begun to build an aircraft though, apparently to test their engineering skills before they begin work on a shuttle which they hope will send a Ugandan cosmonaut into space.
The plane they've built is sandwiched tightly, nose-to-tail, between two single-storey buildings which house Chris and his team. It is painted blue and white and has the Ugandan flag proudly displayed on the side of the cockpit.
It's far from complete, there's still no engine - just a pile of bricks to simulate weight, and a mass of wires hang out underneath.
But it still seems like quite an achievement and if this hadn't been a space programme I'd have been pretty impressed. Chris believes that if his team is successful, this will still be the first aeroplane designed and built in Uganda.
Jackfruit tree
Chris's team is made up of volunteers, mainly engineering students, and when I visited all of them were busy at work, each furiously rubbing away at the fuselage with sandpaper. All except for one man whose job appeared to be to paint the same spot on top of the cockpit over and over again.
I asked Chris how far away he thinks he is from his dream of sending a manned shuttle into orbit.
"Let me tell you", he replied, "building a space shuttle is a big job." He thinks he'll have it done in four to six years.
Standing in the garden, watching the team labouring away beneath a jackfruit tree, tarpaulin fence gently flapping in the breeze, I was fighting back cynicism pretty hard.
Uganda is not known to be a big player in space exploration. In fact, Chris will need to certify the would-be cosmonauts himself as there's no-one else in the country able or qualified to do so.
He's even having to do the training himself. His course draws heavily on his background as a student of astronomy - he's been teaching them how to calculate the distance between planets for example, telling them what the Karman line is, and educating them about the dangers of re-entry.
A lack of local facilities is hampering the project and I asked Chris how he plans to simulate zero gravity, for example, in Kampala.
"Easy" he said. "I've got a jet engine on order so I'm planning to build a tunnel, put the engine at one end and when I throw a guy in he'll float in a similar way to how he would in space."
Admiration
Another challenge is finance. A recent decision in the US to reduce funding to Nasa provoked a public outcry, yet the space agency will still receive many billions this year and next.
The African Space Research Programme relies on donations from its members, of whom there are 600 or so, mainly in Uganda. They'd need to give pretty generously for Chris's craft just to get off the ground, never mind make it into orbit.
So, it's easy to mock, and to dismiss Chris as a dreamer, and to say that an African space shuttle is a fantasy. But many Ugandans feel differently, and they look with pride to the country's contribution to space exploration.
Until last month, the first black flight director at Nasa was Kwatsi Alibaruho, a Ugandan national. The country's president has been known to refer to Alibaruho as an example of what his country's people are capable of achieving. His father is an academic at a Ugandan university, and according to President Museveni the achievements of his son confound the world's view of Uganda as underdeveloped and backward.
Walking away from the African Space Research Programme, I had to feel some sneaking admiration for Chris's ambition, if not a great deal of confidence that Uganda's first manned space shuttle will be lifting off from Kampala within the decade.
It made me think of a line from a Robert Browning poem: "Ah, but a man's reach should exceed his grasp, or what's a heaven for?"
Posted by Terrobuster at 1:45 AM