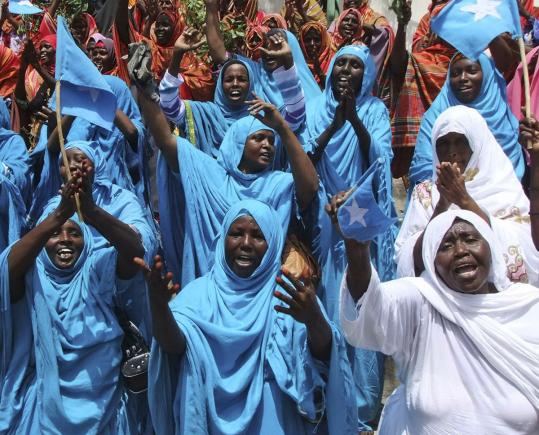 Thousands of Somalis rallied in Mogadishu yesterday over the withdrawal from the city of Al Shabab militants. “We pray they will not come back,’’ said demonstrator Makay Aden. (Farah Abdi Warsameh/Associated Press)
Associated Press / August 24, 2011
MOGADISHU, Somalia - Thousands of Somalis attended a rally yesterday to celebrate the withdrawal of Islamist rebels from bases in the Somali capital, even as the militants executed three men accused of spying in a de-facto court.
Prime Minister Abdiweli Mohamed Ali addressed the rally at Mogadishu’s Konis stadium, which was a training ground for the insurgents until they pulled back from their bases earlier this month. He said Somali troops had overcome many difficulties to drive Al Shabab rebels from the capital.
Much of the fighting was also done by a 9,000-strong African Union force supporting the UN-backed government, and Ali acknowledged them in his speech. “Thanks to our army, AMISOM, and our people,’’ he said, using the abbreviation for the African Union Mission in Somalia. “Our troops made those achievements despite difficulties they face, including lack of salary and camps. Within a short period we shall get rid of [Al Shabab] from the country.’’
Residents attending the rally said they were tired of being intimidated by Al Shabab, which is linked to Al Qaeda.
“We are free and started a new comfortable life when [Al Shabab] left us,’’ said demonstrator Makay Aden. “We pray they will not come back. They killed many of our people; beheaded bodies were scattered on our streets when they were here.’’

© Copyright 2011 Globe Newspaper Company.
Posted by Terrobuster at 7:50 AM