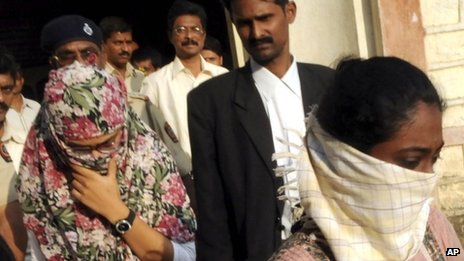 Shaheen Dhada and Renu Srinivasan were arrested on Monday
An Indian woman who was arrested on Monday over a comment on Facebook has said she was "shocked" by the incident.
Shaheen Dhada was arrested for criticising the shutdown of Mumbai after the death on Saturday of controversial politician Bal Thackeray.
Her friend, Renu Srinivasan, who had "liked" the comment was also arrested. The two were later freed on bail.
Recently, police have arrested a number of people in cases which campaigners call a breach of freedom of speech.
Apology On Tuesday, Ms Dhada spoke to the BBC Hindi service by telephone from the town of Palghar, near Mumbai.
"I'm not angry, I'm not sad, but I'm just shocked. It was just my point of view, I'm shocked that it was my post because of which all this happened," she said.
Ms Dhada also apologised for the post because, she said, she did not want to "hurt anyone's sentiments".
Her friend, Renu Srinivasan, apologised too.
"We are apologising just to keep everything in place. We don't want any violence. We want ourselves and our families to be safe," she told the CNN-IBN television channel.
The women were charged with "creating or promoting enmity, hatred or ill-will between classes". They were also charged under the Information Technology Act.
After Ms Dhada's comment appeared on Facebook, a mob attacked and vandalised her uncle Abdul Dhada's clinic in Palghar on Sunday.
Police said on Tuesday that they had arrested nine people in connection with the attack and were "looking for some more people".
The death of Bal Thackeray, the Hindu nationalist politician who founded the Shiv Sena party, brought Mumbai to a halt for most of the weekend.
In her Facebook comment on Sunday, 21-year-old Shaheen Dhada wrote: "People like Thackeray are born and die daily and one should not observe a 'bandh' [shutdown] for that."
The arrests led to outrage in India, with many accusing the government of "abuse of authority".
Press Council of India Chairman Markandey Katju has written a letter to the Maharashtra Chief Minister Prithviraj Chavan criticising the arrests.
"We are living in a democracy, not a fascist dictatorship. In fact, this arrest itself appears to be a criminal act, since... it is a crime to wrongfully arrest or wrongfully confine someone who has committed no crime," Mr Katju, a former Supreme Court judge, said.
Telecommunications Minister Kapil Sibal said that he was "deeply saddened" by the arrests.
In recent months, India has been criticised for being "over-sensitive" to comment on social media.
In October, Ravi Srinivasan, a 46-year-old businessman in the southern Indian city of Pondicherry, was arrested for a tweet criticising Karti Chidambaram, son of Indian Finance Minister P Chidambaram. He was later released on bail.
Other cases have also raised concern about freedom of expression. In September, there was outrage when a cartoonist was jailed in Mumbai on charges of sedition for his anti-corruption drawings. The charges were later dropped.
In April, the West Bengal government arrested a teacher who had emailed to friends a cartoon that was critical of Chief Minister Mamata Banerjee. He too was later released on bail.

Posted by Terrobuster at 5:39 AM