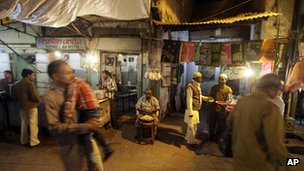 The incident took place in the bustling Nizamuddin area
A teenage girl in the Indian capital Delhi has been shot dead by a man after she objected to him urinating near the gate of her family home, police said.
The man, who lived in the same building, also shot at and injured the girl's mother in the incident in the bustling Nizamuddin area, police said.
The police said they were looking for the man, who apparently fled the scene.
Seventeen-year-old Binoo and her mother Sadmani, 40, had come across the man on Thursday, police said.
"The two families live in the same building. The girl and her mother objected to the man urinating near the gate of the house. This led to an argument between the two sides," senior Delhi police official Ajay Chaudhary told BBC Hindi.
"The man went back into the house saying 'I'll see you' and came back to the girl's apartment with a pistol and shot them. The girl is dead and her mother is injured.''
Mr Chaudhary said the police has not yet found any evidence of "any other dispute" between the man and the girl's family.

Posted by Terrobuster at 1:09 AM