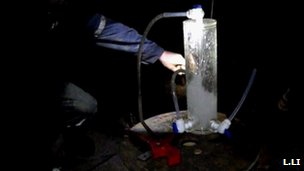 Ancient gas and water is collected from 2.4km down in the Timmins mine
Water drilled from rock in a North American mine is among the oldest yet found on Earth, say scientists.
Novel dating techniques used by the Canadian and UK team suggest the fluid is at least 1.5 billion years old.
The water was probably once on the surface and then percolated through the ground where it became trapped at a depth of 2.4km.
The discovery, made under Timmins, Ontario, is reported in this week's edition of the journal Nature.
Although far from any light source, particular types of micro-organism could survive in the water - it has the right chemistry; it is rich in dissolved gases like hydrogen and methane.
The team is currently testing its samples to determine whether any such lifeforms are indeed present.
"There are similar waters in South Africa with almost identical chemistry that are tens of millions of years old, and they contain microbes that have adapted to that environment," explained Prof Chris Ballentine from Manchester University.
"These are microbes that can survive on the energy from the natural water-rock interactions," he told BBC News.
A positive identification would have fascinating implications for our understanding of how life evolved on the early Earth and where it could exist underground today on other planets, such as Mars, Prof Ballentine added.
Xenon marker The water was recovered from deeply buried sulphide ores containing zinc and copper.
The researchers collected the water as mineworkers drilled new exploratory holes. 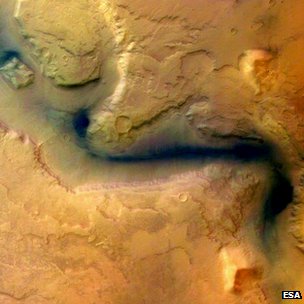 It may be cold and dry today, but Mars retains evidence of surface water in its past
Temperature increases with depth and so the fluid emerged at 40-50C.
Three dating techniques were employed to work out how long the water trapped in the rock had been isolated.
A key method involved studying the different types, or isotopes, of xenon dissolved in the fluid.
The noble gas can be used as a marker to time when the fluid was last in contact with the atmosphere at the Earth's surface.
This approach only produces a broad age range, so the best the team can say is that the Timmins water had been resident underground for between 1.5 billion and 2.6 billion years. Even so, this is still hundreds of millions of years older than samples recovered from deep under South Africa's Witwatersrand Basin.
The only water known to be more ancient is found in minute quantities trapped in the voids in some rock minerals. These inclusions can be billions of years old.
Hidden reservoirs Members of the research group at Toronto University are now examining the Timmins samples for their biological content.
Identifying microbes would go to the heart of issues about the habitability of deep Earth environments and for the prospects of finding life on other worlds. 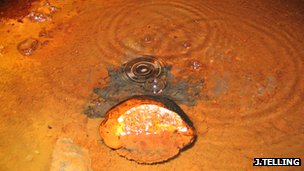 The water in the mine has the right chemistry to support certain kinds of microbes
Mars, for example, is cold and dry at its surface today, but the evidence suggests it was much warmer and wetter billions of years ago.
A lot of that early water was lost to space, but some of it is thought to have retreated to deep reservoirs.
Findings like those at Timmins raise the possibility that similar, long-isolated environments could yet persist on Mars, possibly supporting micro-organisms.
"The study has consequences for our understanding of how early life on Earth may have migrated into these kinds of environments and been protected from cataclysmic events at the surface," said Prof Ballentine.
"And being completely speculative, on somewhere like Mars, where the surface may have been habitable in its early history, water could have percolated into deep environments and been preserved on planetary timescales."
Jonathan.Amos-INTERNET@bbc.co.uk and follow me on Twitter: @BBCAmos