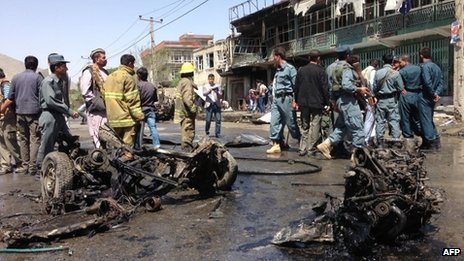 Up to six people are feared dead after the explosion
A suicide bomber has blown himself up near a convoy of foreign armoured cars in Afghanistan's capital, Kabul, the provincial police chief says.
Up to six people, including two children, have been killed, he said, and others are reported injured.
The Nato-led International Security Assistance Force said it was looking into reports of foreign casualties.
Smoke rose above the industrial district of Karta-e Naw, in the east of the city, after the powerful explosion.
It is the first major blast in Kabul since March, when a suicide bomber blew himself up near the defence ministry, killing nine people.
In Thursday's attack, an explosives-filled Toyota Corolla was blown up beside two foreign military vehicles at around 08:00 (03:30 GMT), Kabul Police Chief Gen Salangi said.
The force of the blast destroyed several houses and a wide area of the city has been cordoned off. Sirens could be heard afterwards as ambulances headed to the scene.
An insurgent group linked to the Taliban Hezbi Islami said it carried out the attack.
The latest attack comes during what has been a bloody month for Isaf in Afghanistan, with at least 15 foreign military personnel killed in separate incidents since the beginning of May.