Man Can’t Help Not Showing His Wife’s Cleavage In Every Yelp Review He Posts! – BuzzWok (Buzzwok)

Published time: October 27, 2014 09:14
Get short URL
Reuters / Daniel Munoz
4.1K4523
Tags
Australia, Human rights, Politics, Protest, Religion
A trio of activists wearing a KKK outfit, a burqa and a motorcycle helmet attempted to enter× Australia’s parliament house in× Canberra, challenging the idea of allowing women wearing face veils in public places.
When the three approached the security, the men wearing a helmet and a Ku Klux Klan hood were immediately asked to remove their headwear, but there was a moment of hesitation concerning the Muslim veil. 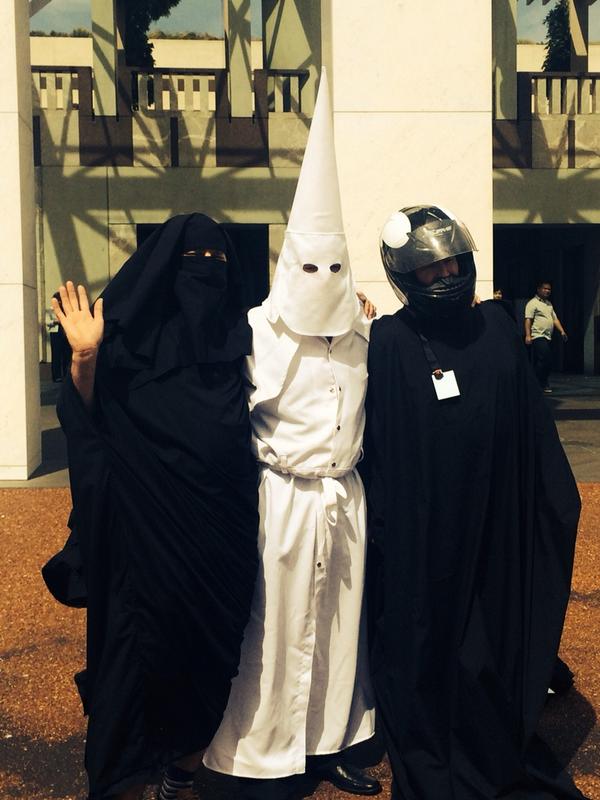 The man in a KKK hood took it off only to reveal he had a burqa underneath.

"Bit of a loophole, eh?" he asked.
The three men who participated in the stunt - Sergio Redegalli, Nick Folkes and Victor Waterson – are members of protest movement ‘Faceless’, which is generally against the wearing of burqas or niqabs in public places across Australia.

Their Monday action comes in the wake of the Australian government initially ruling that women wearing face veils should be separated from the public in× House, but later scrapping the decision.

The three later spoke to journalists to explain what they were campaigning for.

"It seems that you're allowed to wear a full-faced covering into parliament if you're a Muslim woman, but no other group is allowed to have that same privilege," Sergio Redegalli, who wore the KKK outfit, told reporters, according to ABC.

"No one should be walking up the [parliamentary] forecourt or in [the] public domain hidden from sight," he added.

The men explained they had nothing to do with the Ku Klux Klan, and were only using its paraphernalia to stress their point.
There are supporters of the burqa ban among ruling Coalition MPs - including× Liberal senator Cory Bernardi, who has praised Faceless for the anti-burqa stunt, saying that it demonstrated

"just how ridiculous it is to allow anyone wearing an identity concealing garment into parliament house."

The Australian Christian Lobby’s Queensland director, Wendy Francis, has however criticized the group for staging a “hurtful” action.

“To identify [the KKK] with a Muslim woman is extremely confronting and hurtful,” she said, according to the Guardian.

Currently, women wearing a burqa or niqab are obliged to show their face to the security at the parliament house, but can continue to wear it once inside.
Posted by Terrobuster at 10:46 PM