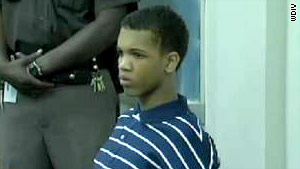 DeMarco Harris, 13, was convicted of fatally shooting a woman during a robbery when he was 12.
STORY HIGHLIGHTS
RELATED TOPICS
(CNN) -- A Michigan judge ordered a 13-year-old boy convicted of murdering a woman during a robbery to remain in juvenile detention until he turns 21.
Wayne County Judge Sheila Gibson gave Demarco Harris a blended sentence. The Detroit teen, who committed the crime when he was 12, will be re-evaluated by the court after his 21st birthday.
Depending on the court's findings, Harris will either be released from custody or sentenced as an adult to life in prison without the possibility of parole.
If Harris is convicted of a felony while he is in custody, he will automatically be sentenced as an adult to life in prison, the judge said.
"There are really no happy endings in a case like this," Wayne County Prosecutor Kym I. Worthy said in a statement. "My heart goes out to the family of the victim who have lost a loved one due to a violent and senseless act."
Harris was found guilty earlier this year of murdering Trisha Babcock during a robbery. The 24-year-old woman was shot to death inside her parked car in Detroit on August 1, 2009.
The victim's father called the sentence unfair. "I feel he should definitely spend the rest of his life in prison," Steven Babcockn told CNN. "For him to have a chance or opportunity to be set free when he is 21 is not justice for my daughter."
Babcock said he wanted the judge to set an example. "Just because you're 12, 13, 14 doesn't mean you can murder somebody and be set free when you are 21," he said.
Maria Miller, spokeswoman for the Wayne County Prosecutor's Office, said Harris will be confined to a secure juvenile facility where offenders convicted of serious violent felonies are heavily monitored.
Posted by Terrobuster at 6:35 AM