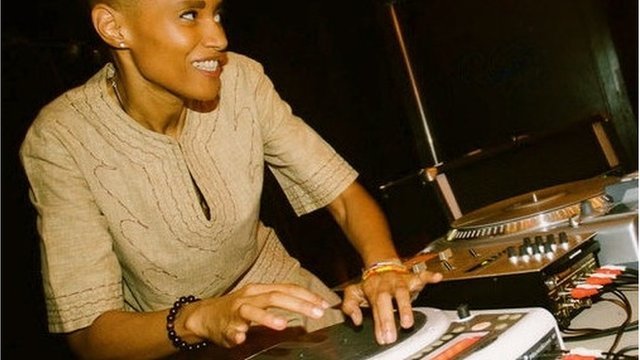 Haitian-American musician Val Jeanty uses drum beats to create a funky fusion she calls "voodoo electronica"
Two years after an earthquake devastated Haiti, Haitians in America have turned to traditional religious ritual for comfort. Leigh Paterson explains the power of voodoo.
They gather at a voodoo temple in a dark Brooklyn basement strewn with candles, plastic skulls and half-empty bottles of rum, the remains of a recent ceremony.

With the knowledge of herbs and stars, we can heal”

Atibon Legba Actor
Continue reading the main story
There, Haitian-American artists come to talk about their faith in voodoo and how it keeps them connected to their homeland.
"The religion is like a glue," says voodoo priestess Marie Saintil. "We attract each other. If a drum is beating, and someone hears it, the next thing you know, this place is packed."
That connection is especially important this month, on the two-year anniversary of the earthquake that devastated Haiti.
Since the quake, voodoo has played an important role in the healing process. Many of these Haitian immigrants have found comfort in the faith and community that voodoo cultivates, practitioners of the religion in the US say.
Fusion of beliefs Haitian voodoo (spelt 'vodou' in Creole) is an ancient practice that emerged among the first Africans brought to Haiti as slaves in the 16th Century. 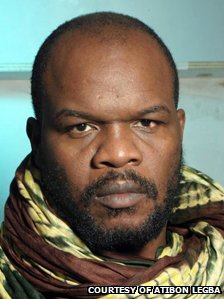 Mr Legba says voodoo offers a link to nature and ancestors
Unable to practice their own diverse religions openly, the slaves fused them with the Catholic beliefs of the Spanish and French slavers.
From these complex beginnings voodoo has become an important part of Haitian culture, especially for those living far from home.
Marie Saintil came to Brooklyn more than 20 years ago.
"We advise, we help. Any time of the night and day, we get phone calls from our religious children," Ms Saintil says. "Sickness, family troubles, we are right in there."
The 2009 earthquake left homeless 1.5 million Haitians, some of whom came to the US.
About 48,000 Haitians arriving within a year after the quake were given temporary permission to stay, work and send money home, as were about 200,000 who had previously been in the US, according to the US Department of Homeland Security.
'Magic happens' After the quake hit, Haitian communities across the US came together and used voodoo to make sense of the tragedy.
"This is where the magic happens, beauty happens, the healing happens, counselling happens," says Atibon Legba, a Brooklyn-based actor, gesturing to the darkened temple.

"With the knowledge of herbs and stars, we can heal."
Voodoo practitioner Neg Mawon, who was in Brooklyn when the quake struck, explained that by consulting certain voodoo spirits, he finally came to understand and accept what had occurred.
"When it happened, we were doing small groups of networking, trying to comfort each other," he says.
"We had so many voodoo ceremonies and musicians who had been playing fundraisers. We had a great support system in New York."
Brooklyn-based photographer Regine Romain visited Haiti two weeks after the quake and attributes many of the miraculous survival stories to the country's faith in voodoo.
"Our spiritual connection is what really helped us get past the tragedy," she says.
"I had to really start praying that people would be found. It is a land filled with magic, and a connection to that which was unseen.
"Whether you're voodooist, Christian, Baptist, Hindu, whatever your background is, there is an understanding that life is not permanent. And in the traditions of voodoo, there is peace that is made with death."

Voodoo ceremonies do not take place on a weekly basis, like Catholic mass or a Jewish Shabbat service.
A voodoo practitioner can request a ritual meeting with a priest or priestess but, more often, ritual ceremonies mark holidays.
Practitioners hope to connect with deceased ancestors through a series of songs and prayers.
During the singing and drumming, they aim to become possessed by voodoo spirits.
"Voodoo is veneration of our ancestors and also our connection to nature," says Brooklyn-based actor Atibon Legba.
At a recent ceremony practitioners in the Brooklyn temple celebrated the Gede, an important voodoo spirit who connects with the dead.
Posted by Terrobuster at 9:21 PM