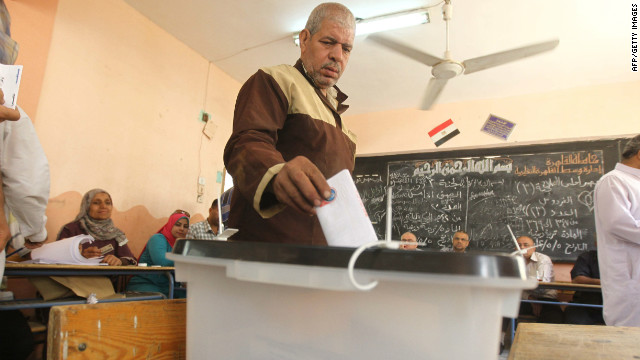 
STORY HIGHLIGHTS
Cairo (CNN) -- Polls opened Thursday morning in Egypt for the second and final day of voting in the country's groundbreaking presidential election, even as many worried the armed forces would quash the results if the top brass doesn't like the country's choice.

Government employees have been given the day off work to vote in the first Egyptian presidential election in history where no one knows what the result will be before the ballots are cast.
Voting was going smoothly in a northern suburb of Cairo on Thursday, where women were waiting half an hour to 45 minutes to cast their ballots.
After the polls closed on Wednesday, the first day of voting, a former top United Nations official said the election could be a turning point for the country.
If "ordinary Egyptians see this as a legitimate expression of their own popular will," regardless of who wins, "then it can be a prelude to the real return of security and stability in the country," said Mark Malloch Brown.
The former top diplomat and development expert said he was very optimistic about Egypt in the medium term, even if the country was probably in for a "bumpy ride" in the short term.
"We went through this with Eastern Europe after 1989," when the Communist regimes there fell, Malloch Brown told CNN's "Connect the World" program. "It just takes time. People need to settle into a new political order. Whatever happens in the next months, people need to just hold onto the fact that (Egypt) will get there."
He predicted that a post-revolutionary Egypt would be "a little bit more Islamic than it was before, a little bit more feisty and independent vis-a-vis the U.S. and Israel," while domestically, it would "really try and focus on doing a much better deal for poor Egyptians."
A wave of enthusiasm swept across polling stations on Wednesday.
"Finally, Egypt is born," one weeping 80-year-old man said on Wednesday to Rep. David Dreier, a California Republican who is in Cairo as an election observer.
Zakaria: Is Egypt ready?
Grandmother Nadia Fahmy, 70, was so determined to be the first one to vote at her polling station that she camped out in a plastic chair for 2½ hours before it opened on Wednesday.

Second day of voting in Egypt

Egypt elections: To vote or not to vote?

Why Egyptian election matters
"I am here to vote for the first time in my life," said Fahmy. "I want to see a new generation for my country. I want everything to change."
Other people told CNN they had waited up to four hours to vote as an atmosphere of enthusiasm swept polling stations in the capital.
Egypt elections: 'Women need a champion'
The voting is a monumental achievement for those who worked to topple longtime President Hosni Mubarak in one of the seminal developments of the Arab Spring more than a year ago. And it could reverberate far beyond the country's borders, since Egypt is in many ways the center of gravity of the Arab world.
Egyptian police officers convicted of murder in protest crackdown
"Egypt has always set trends in the Arab world and for Arab political thought. Trends spread through the Arab world and eventually affect even non-Arab, Muslim-majority countries," said Maajid Nawaz, the chairman of Quilliam, a London-based think tank.
Egypt's election "bodes well for the rest of the Arab world and particularly those countries that have had uprisings," said Nawaz, a former Islamist who was imprisoned in Egypt for four years for banned political activism.
Amnesty International was critical of the military leaders who rule Egypt in its annual report on human rights around the world, which was released Thursday.
"There's a number of reasons for that," said Philip Luther, deputy director of Amnesty International's Middle East and North Africa program.
"One is that in some cases they've continued the abuses of the Mubarak regime, in that over 100 people have been killed in the streets in demonstrations as a result of excessive force used by security or military forces. So there's a real problem there which certainly mirrors the over 800 deaths that occurred during the uprising itself," he said.
Amnesty is also opposed to the use of "virginity testing" on some women protesters, saying it is "tantamount to torture and totally unacceptable."
The authorities have not done enough to ensure that women can contribute on an equal footing with men to the ongoing process of political reform, he also said.
Amnesty wants whoever takes office as president to end the state of emergency and end the use of military trials for civilians.
There are 13 candidates on the ballot, although two withdrew from the race after ballots were printed. If no candidate gets a majority of the vote in the first round, a second round will be held June 16-17.
Results of the first round are not expected before the weekend.
Some 30,000 volunteers have fanned out to make sure the voting is fair, said organizers with the April 6 youth movement, which has long campaigned for greater democracy and rule of law in Egypt.
They reported only minor violations on Wednesday, mostly supporters of one candidate or another trying to influence voters at polling stations.
There is a pervasive fear that the powerful military, which has run the country since the fall of Mubarak, could try to hijack the election.

'Fighting for a secular state' in Egypt

Tourism trickles back into Egypt
Egypt's revolution: 'We fell in love, but it was a trick'
The concern persists despite the insistence of the Supreme Council of the Armed Forces that it will hand over power to an elected civilian government. The military leaders put armored personnel carriers on the streets with loudspeakers broadcasting a message that they will relinquish power, but that did not convince doubters.
Nawaz, the analyst in London, said Egypt probably is not heading toward a simple case of the military either giving up control or rejecting the results of the election.
Instead, he anticipated, there will be an "unhappy settlement" where the military remains "ever-present, in the shadows," influencing the civilian government without controlling it.
Old politics joins new in Egypt
"Egypt is going along similar lines to Turkey or Pakistan," he said, naming two other countries that have formal democracies in place but where a powerful military can affect events.
The degree to which the military continues to exercise control in Egypt will depend on who wins the election, Nawaz anticipated -- but he laughed aloud when asked to predict who that would be.
Whoever wins the election, Nawaz said, will face tremendous challenges, even without worries about the army.
"They are inheriting a failed economy, an abysmal bureaucracy, a frustrated people, and a deep distrust on behalf of the people towards their military and any policing," Nawaz said.
And Egypt has an elaborate political mosaic where alliances shift quickly, he added.
Secular democrats oppose military rule, for example, but if an Islamist candidate wins the presidency, "Some of the democrats would switch because they would rather have military rule than the Islamists," Nawaz said.
Opinion: Egypt's military must stop torturing detainees
"It's far more complicated than 'Islamists vs. liberal democracy.' It's rich vs. poor, (hardline) Salafists vs. the (more moderate) Muslim Brotherhood, secularists vs. Islamists," he said.
On top of that, the country does not yet have a new constitution defining the powers of the president or the parliament, after a court last month suspended the committee charged with writing it. The court ruled that the members of the committee did not reflect the national population well enough.
Among the candidates vying for the presidency are Mohamed Morsi, of the Muslim Brotherhood's Freedom and Justice Party; Amre Moussa, who served as foreign minister under Mubarak and headed the Arab League; Abdelmonen Abol Fotoh, a moderate Islamist running as a respected independent; Ahmed Shafik, who was Mubarak's last prime minister; and Hamdeen Sabahy, a leftist dark-horse contender.
The vote comes nearly 16 months after the popular uprising that brought down Mubarak in February 2011. Mubarak was tried on charges of ordering police to shoot protesters during the uprising against him, and of corruption.
He is awaiting the court's verdict and could potentially face the death penalty.
Despite the high-profile trial of the man who ruled the country for 30 years, popular distrust and anger, particularly against the military's power in Egyptian governmental affairs, still inspire protests, some of which have been marked by deadly clashes.
Protesters are upset at what they see as the slow pace of reform since Mubarak's ouster. Some are also concerned that the country's military leadership is delaying the transition to civilian rule.
In January, two Islamist parties won about 70% of the seats in the lower house of parliament in the first elections for an elected governing body in the post-Mubarak era.
The Freedom and Justice Party won 235 seats and the conservative Al Nour party gained 121 seats in the People's Assembly, according to final results. The assembly consists of 498 elected members, and the rest of the seats were divided among other parties.
CNN's Salma Abdelaziz and Hala Gorani and journalists Ian Lee and Mohamed Fadel Fahmy contributed to this report from Cairo. Richard Allen Greene and Laura-Smith Spark reported from London.
Posted by Terrobuster at 7:30 AM