Saudi king calls on Arabs to stand with Egypt 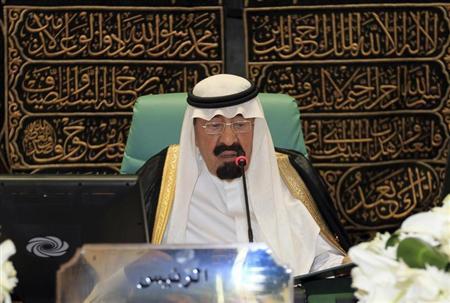 (Reuters) - Saudi King Abdullah called on Arabs to stand together against "attempts to destabilize" Egypt, in a strong message of support for the country's military leadership read out on Saudi television on Friday.
"The Kingdom of Saudi Arabia, its people and government stood and stands by today with its brothers in Egypt against terrorism," he said.
"I call on the honest men of Egypt and the Arab and Muslim nations ... to stand as one man and with one heart in the face of attempts to destabilize a country that is at the forefront of Arab and Muslim history," he added.
Saudi Arabia was a close ally of former president Hosni Mubarak and has historically had a difficult relationship with the Muslim Brotherhood. It pledged $5 billion in aid to Egypt after Mohammed Mursi of the Brotherhood was ousted from the presidency last month.
(Reporting by Angus McDowall; editing by Andrew Roche)inShare

Posted by Terrobuster at 8:22 AM