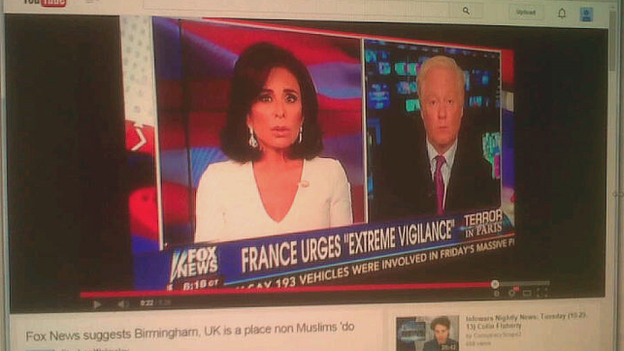 US terror commentator Steven Emerson was speaking to Fox presenter Jeanine Pirro
An American terrorism commentator speaking on Fox News has been forced to apologise for describing Birmingham as a "Muslim-only city" where non-Muslims "don't go in".
Steven Emerson told the channel that in London "Muslim religious police" beat "anyone who doesn't dress according to Muslim, religious Muslim attire".
He later issued an apology for his "terrible error".
But many on social media have been ridiculing his comments.
One claimed: "Birmingham's refuse collectors are all Bin Laden."
Another tweet said: "As someone born and raised in Birmingham, I must admit there was a pressure to read the Kerrang."
"I was supposed to go to Birmingham last week but I forgot my passport," said one tweeter.
'No excuse' His comments about Birmingham and London led to many reacting on hashtag #FoxNewsFacts.
Some accused him on his investigative website of "speaking nonsense" and called his claims "utter rubbish".
Emerson, who founded a group called The Investigative Project on Terrorism, was giving his perspective on the terror attacks in France to Fox presenter Jeanine Pirro.
A witness called to testify to at least one Congressional committee, he later apologised and has offered to make a donation to Birmingham Children's Hospital.
"I have clearly made a terrible error for which I am deeply sorry. My comments about Birmingham were totally in error."
He said he would be issuing an apology on his website for "this comment about the beautiful city of Birmingham".
"I do not intend to justify or mitigate my mistake by stating that I had relied on other sources because I should have been much more careful.
"There was no excuse for making this mistake and I owe an apology to every resident of Birmingham."