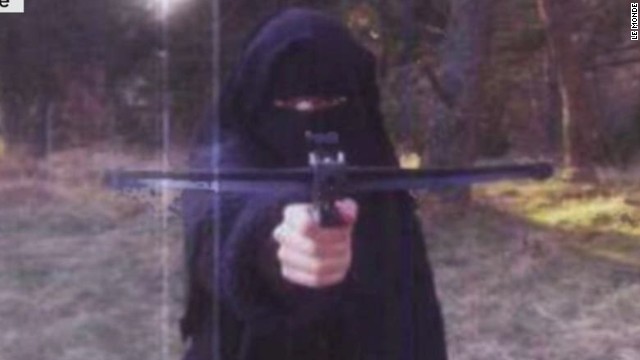 (CNN)Hayat Boumeddiene seemed kind and polite, always wearing a veil and often motoring around on a scooter with her romantic partner Amedy Coulibaly, a neighbor in a southern Paris suburb recalls.
Now the 26-year-old Boumeddiene is the subject of an international dragnet after Coulibaly -- said to be linked to two brothers suspected in Wednesday's massacre at the offices of a Parisian satirical magazine Charlie Hebdo -- allegedly killed hostages at a Paris kosher supermarket Friday before police fatally shot him.
Police earlier named Boumeddiene and Coulibaly as suspects in Thursday's slaying of a female police officer in the southern suburb of Montrouge. 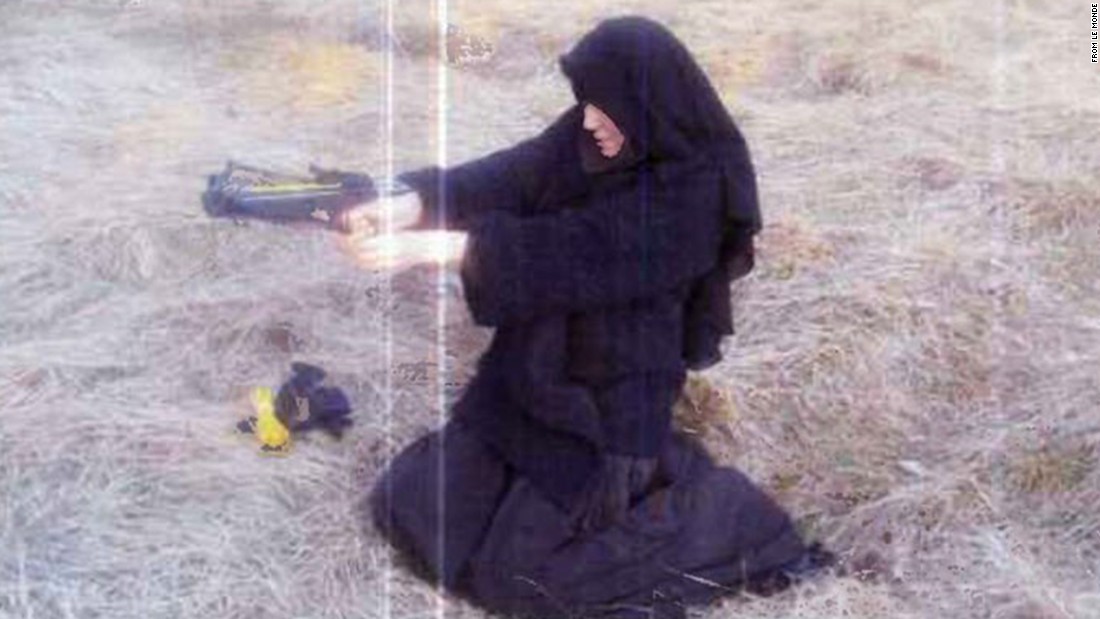 The French newspaper Le Monde says this is a 2010 photo of Hayat Boumeddiene.
With Coulibaly dead, and Charlie Hebdo suspects Cherif and Said Kouachi killed Friday at a separate standoff north of Paris, Boumeddiene is the last prime, publicly identified suspect that police are seeking in connection with France's recent wave of terror attacks.
A French source close to the nation's security services said Boumeddiene is thought no longer to be in France.
She entered Turkey on January 2, a Turkish prime ministry source told CNN on Saturday. Turkish police have a track of her movements, said the source.
Boumeddiene is thought to have left for Turkey "of course to reach Syria," according to the French source.
The revelations raise questions of whether Boumeddiene was even in France during this week's attacks.
Earlier, French police union spokesman Pascal Disant said Boumeddiene may have left the market siege and eluded capture as hostages were freed. So far, no witness has publicly said she was there.
But Disant said that the Kouachi brothers and Coulibaly were part of the same jihadist groups, and Paris prosecutor Francois Molins indicated Boumedienne and Cherif Kouachi's wife also were well-connected, saying they exchanged 500 phone calls in 2014.
Who is Boumeddiene?
Armed investigators on Saturday milled around the apartment shared by Coulibaly and Boumeddiene in Fontenau aux Roses, south of Paris. 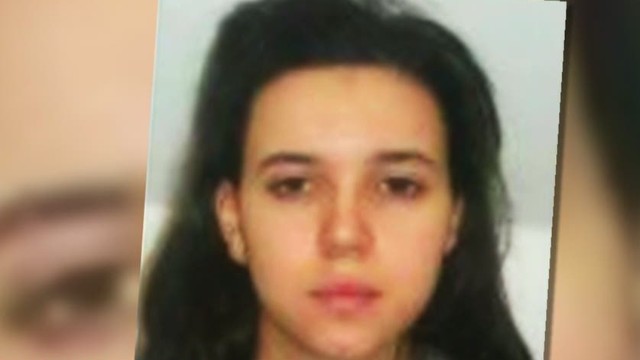 Who is female terrorist suspect on the run? 01:32
PLAY VIDEO
Both of their names still were on a letterbox of the lobby of the building, situated across from a library.
They lived in an apartment above an Indian restaurant for about five years, according to a neighbor who spoke on condition of anonymity. The neighbor said the couple were always polite, and she often saw them drive around the neighborhood together on a scooter.
As far as the neighbor could remember, Boumeddiene always wore a niqab, a veil that some Islamic women wear to cover all of their head and face except for the eyes.
The French newspaper Le Parisien reported that Boumeddiene was one of seven siblings hailing from Villiers-sur-Marne, France. Her mother died in 1994, and at age 8 or 9 she and some of her other siblings were put into foster care when her father struggled to raise them alone, Le Parisien reported.
The paper reported that Boumeddiene "religiously wedded" Coulibaly in 2009. The next year, Coulibaly and Cherif Kouachi were involved in a 2010 attempt to free an Algerian serving time for the 1995 subway bombing, a Western intelligence source told CNN.
Coulibaly was indicted May 22, 2010, and spent time in prison in connection with the prison break plot. Cherif Kouachi was under investigation for the same plot, but there was not enough evidence to indict him, the source said.
Photos published by the French newspaper Le Monde purport to show Boumeddiene in 2010, wearing a niqab and an abaya -- a loose garment covering the rest of her body -- and holding a weapon that appears to be a crossbow in a rural setting. 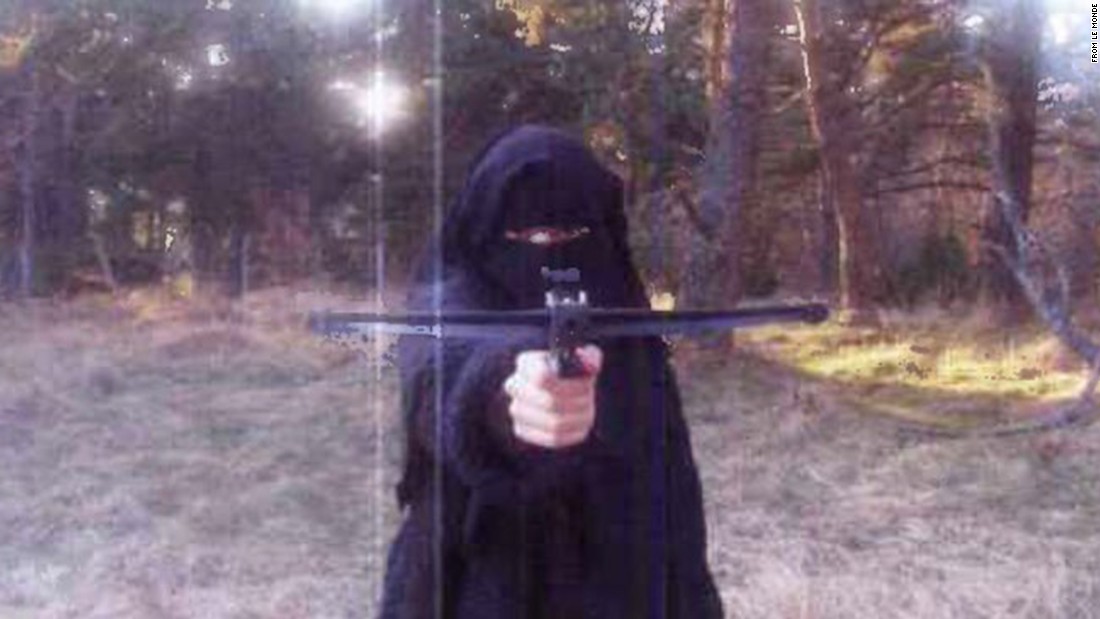 The French newspaper Le Monde says this is a 2010 photo of Hayat Boumeddiene.
Another photo shows her pointing the weapon at the camera, but her face is obscured by the niqab, with only her eyes exposed.
CNN has not independently confirmed the authenticity of the photos.
In one of the photos, Boumeddiene in a niqab is posing nearly cheek-to-cheek with Coulibaly in what the newspaper called a selfie. 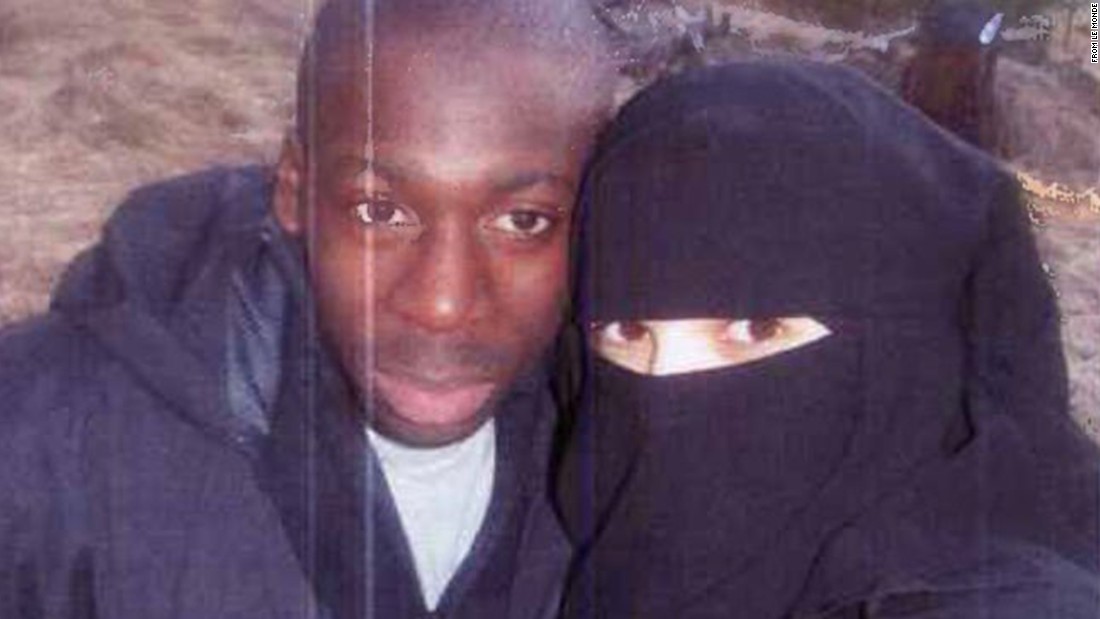 The French newspaper Le Monde says this is a 2010 photo of Hayat Boumeddiene and Amedy Coulibaly.
Coulibaly holds a pistol in a firing pose in another photo.
In another, Boumeddiene is kneeling and readies to fire the crossbow-like weapon. In that photo, her face and hands are exposed, but her face can only be seen in profile.
The market standoff
French authorities say Coulibaly took hostages at the Paris kosher supermarket on Friday. He demanded the release of the Kouachi brothers, who were surrounded by police in a print shop northeast of Paris, Disant said. 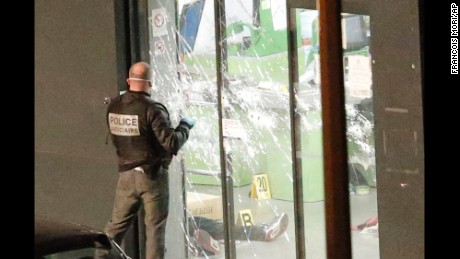 EXPAND GALLERY
Police say a gunman killed four people at that grocery store. Video from French news media shows police raiding the store, and a man -- apparently Coulibaly -- being shot by police as he rushed out of the building toward the raiding officers.
Israeli government sources told CNN that French President François Hollande had told Israeli Prime Minister Benjamin Netanyahu that 15 people were rescued. The four hostages who died were killed by the gunman before police stormed the market, sources said.
Two police officers were also wounded in the raid, Paris prosecutor Francois Molins told reporters.
Hollande said that the market deaths were an "anti-Semitic" act.

The French newspaper Le Monde says this is a 2010 photo of Hayat Boumeddiene.
At almost the same time, the other pair of suspects, Cherif Kouachi, 32, and Said Kouachi, 34, were killed in a police operation in Dammartin-en-Goele, near the Charles de Gaulle Airport northeast of Paris.
The Kouachis, who were brothers and the suspects in the massacre at the Charlie Hebdo magazine office, had been cornered at a printing business in the town, according to the mayor of a nearby town.
CNN's Gul Tuysuz and Nick Paton Walsh contributed to this report.
http://edition.cnn.com/2015/01/10/world/france-woman-suspect/index.html?iid=ob_article_organicsidebar_expansion&iref=obnetwork
Posted by Terrobuster at 10:58 PM