Instead of fighting terror, Prevent is creating a climate of fear 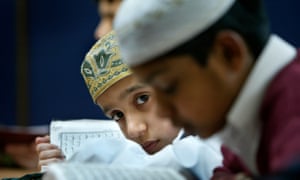 Children at the Victor Street Mosque in Bradford. ‘Prevent creates a systemic risk of violations of the right to freedom of expression, the right against discrimination and the right to privacy.’ Photograph: Murdo Macleod for the Guardian

The problem of “homegrown” terrorism inspired by Islamic State is front and centre of the counter-terrorism agenda in western Europe. In the UK, the government estimates the terrorist threat to be “severe”. It also estimates that about 850 individuals “of national security concern” have travelled from the UK to Iraq and Syria since the conflict there began, and about half of them have returned.
But what is the most effective way for governments to respond to this threat, without undermining the very values of democracy and freedom that they claim they want to defend? 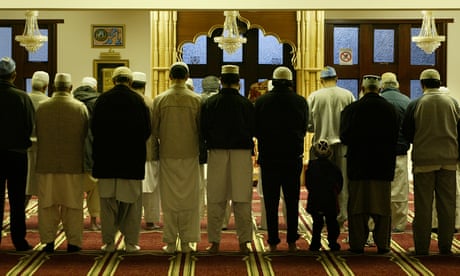 Read more
In the UK, this debate has focused, particularly over the past year, on the government’s Prevent programme – which seeks to stop individuals being drawn into terrorism. Since 2015, the so-called “Prevent duty” has in effect required teachers, doctors and other frontline professionals to report individuals at risk of being drawn into violent and non-violent extremism to the police-led “Channel” support programme. Is this the correct and proportional response?
A report released today by the Open Society Justice Initiative, Eroding Trust: The UK’s “Prevent” Counter-Extremism Strategy in Health and Education says that it is not. Based on legal analysis, case studies and numerous interviews, we argue that Prevent is not only unjust but also unproductive.
Prevent’s overly broad definition of extremism – vocal or active opposition to fundamental British values – creates a systemic risk of violations of the right to freedom of expression, the right against discrimination and the right to privacy. Scottish government officials told me that although the term “British values” was in the Prevent guidance, they “don’t ever use that phrase” because “it could be damaging or unhelpful if it endorses a ‘them and us’ mentality”.

Having spoken to more than 80 experts and individuals affected by the programme, my research found that Prevent was creating a climate of fear and a chilling effect on free expression. Case studies in the report describe children in schools being targeted and intimidated under Prevent for expressing political views. In UK universities – considered by many to be bastions of academic freedom – Prevent is apparently leading to the cancellation of conferences and debates about Islamophobia, and students are being targeted for reading course materials on terrorism.

Advertisement
Conversations about terrorism are being driven underground, where they are less likely to be challenged. In healthcare facilities, doctors fear that their obligation to report patients to the authorities is in conflict with their duty of confidentiality and will undermine the doctor-patient relationship. One psychologist quoted in the report says, “we are being encouraged to police thought crimes and political opinions” and describes another psychologist being fed questions by Prevent officers to ask her patient.
For these reasons, we are calling for the repeal of the Prevent duty in health and education so that frontline professionals can be free to get on with their jobs and apply their professional judgment to respond appropriately to cases that genuinely warrant intervention.
A particularly troubling case study in the report describes an organisation collecting names and sensitive political information for the Home Office – apparently under Prevent, and apparently without informed consent – from nine- and 10-year-old children from a predominantly Muslim area. A questionnaire distributed to the children to elicit their opinions is included in the report.
It asked whether they agreed or disagreed with statements such as: “I think most people respect my race or religion”; “People should be free to say what they like, even if it offends others”; “People from a different race, religion or community are just as good as people like me”; and “Women are just as good as men at work”. It also asked the children how much they trusted people of their race or religion, people of another race or religion, school teachers, police officers, journalists and the UK government. Would these children have been targeted in this manner had they not been predominantly Muslim?

Fahid Qurashi
Read more
In a climate of intense anti-Muslim sentiment, the report argues, Prevent gives frontline professionals broad discretion to act on their conscious and unconscious biases. The report notes that the government’s own figures show that in the past, 80% of referrals to the police-led Channel programme were rejected. Since the statutory “Prevent duty” took effect in 2015, the number of referrals to Channel has skyrocketed. The government’s annual report on Contest, its counterterrorism strategy, notes that “during 2015, there were several thousand referrals to Channel; around 15% of these were linked to far-right extremism, and around 70% linked to Islamist-related extremism”; but that of those referred, only “several hundred” were provided with support in 2015. This suggests that a significant number of individuals were wrongly referred.

Advertisement
Unsurprisingly, Prevent is alienating many law-abiding Muslims wrongly targeted and causing them to question their place in British society. David Anderson QC, the independent reviewer of terrorism legislation, observed in his testimony before parliament’s home affairs select committee that “Prevent has become a more significant source of grievance in affected communities than the police and ministerial powers … that are exercised under the Pursue strand of the Contest strategy”. Prevent’s alienating effect in turn undermines the ability of law enforcement officials to elicit the cooperation of Muslim communities for countering future terrorist attacks.
There are parallels here with another policing issue affecting minority communities: the disproportionate use of stop and search. In 2014, Theresa May, then home secretary, told parliament: “Nobody wins when stop and search is misapplied. It is a waste of police time. It is unfair, especially to young, black men. It is bad for public confidence in the police.” Surely the prime minister’s words are also true for Prevent when it is misapplied to Muslims?
Read more: https://www.theguardian.com/commentisfree/2016/oct/19/terror-prevent-muslims-police-terrorist-attacks
Posted by Terrobuster at 2:16 AM