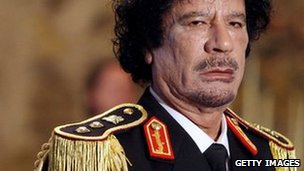 The Gaddafi regime is seemingly on its last legs in Libya; questions are inevitably being raised about what comes next.
But this is a country where the trappings of a normal state simply do not apply.
Col Muammar Gaddafi created such a personalised system of governing that he left no space for anything beyond himself, his family and the narrow ruling elite, many of whom were drawn from his own tribe, the Qadhadhfa.
Unlike in Tunisia or Egypt, those forces that could have helped to smooth the transition process such as political parties, trades unions, opposition groups or civil society organisations simply do not exist in Libya.
Indeed, the country has been notable for its almost total lack of functioning institutions, as all power has been concentrated so heavily around the "Brother Leader".
This personality cult goes some way to explain why Col Gaddafi is going to fight to the death. Although his power is weakening as the opposition is moving ever closer, he still holds Tripoli, his traditional power base.
Yet were he to cling on to the city, his ability to govern would be almost non-existent. His actions over the past few days have destroyed any remnants of credibility he and his regime might have had, and repression alone is unlikely to be enough to keep him in place.
Revenge attacks All this leaves Libya in a major predicament. There is no obvious unifying force or personality who could step in and take over, leaving the risk of a major power vacuum.
This would see various players, primarily tribal leaders, seeking to assert themselves, or at least to take control of their own areas. 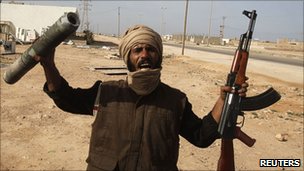 Many protesters are now armed, bringing fears the violence could escalate
Given the long history of antagonism between Libya's tribes, this is unlikely to be a harmonious process. It will not be helped either by the weapons that are already circulating among the protesters, suggesting that violence is a serious possibility.
Indeed, some Libyans fear that the country may descend into anarchy and chaos or, in the worst case scenario, civil war.
While civil war is probably rather exaggerated, conflict and violence are a real possibility. In such a scenario revenge attacks are also likely.
Those involved in Col Gaddafi's notorious security forces, including the hated Revolutionary Committees movement, are unlikely to escape unscathed.

End Quote
Continue reading the main story
The prospect of armed gangs and remnants of the Gaddafi regime battling it out with other interested parties does not bode well for the future.
To avoid such chaos, some Libyans are looking to the army to save the day by ousting Col Gaddafi and overseeing a transition process.
However, Libya's army is unprofessional, divided and has been purposefully kept weak by Gaddafi over the years in a bid to avoid any possible coup attempt. Moreover, as yet there are few signs that the army is withdrawing its support for the regime.
Nevertheless, some elements from within the armed forces have defected to the protesters, along with a handful of senior government figures and diplomats.
Libya's best hope may lie in these figures, who in conjunction with representatives from other walks of Libyan life may be able to smooth the way after Gaddafi.

These representatives would include members of the opposition abroad, pro-reform intellectuals and members of the formal religious establishment who were quick to support the protesters in the early days.
Such a collection of figures would need to work closely with tribal leaders to try to safeguard the country.
However, such a scenario is not without its problems.
Whether such disparate groups with so much history of antagonism could come together and reach a consensus is questionable.
More importantly, while those in the west of Libya may well support former army officers and regime members, these figures will be far less palatable to easterners.
The east has long had a troubled relationship to the regime and to the west more broadly, and its inhabitants are likely to reject any solution that appears to continue domination by those associated with the west.
There are even suggestions, which are not entirely without foundation, that the east may break away and form its own independent region. Such attempts would be likely to result in further chaos and bloodshed.
Oil fears Libya clearly has an upward struggle on its hands. How the international community will deal with events has yet to be seen. 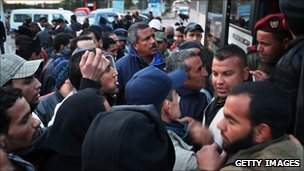 Refugees are already flooding across Tunisia's borders with Tunisia and Egypt
A collapsed state in Libya would clearly have serious implications for Europe in particular, not least over issues related to oil supply and illegal immigration.
Perhaps its best bet would be to reach out to those forces capable of managing a transition, offering support and assistance with state-building in the longer term. Such support will be crucial if Libya is to survive the post-Gaddafi era.
Meanwhile, neighbouring countries will be eyeing developments closely.
A destabilised Libya is the last thing that Tunisia and Egypt want as they struggle through their own transition processes.
While there will be no love lost at the fall of Col Gaddafi, both states are likely to be concerned about economic issues, given that Libya has long been a source of employment for thousands of Egyptians and Tunisians, and cross-border trade is also important.
As for the wider region, Gaddafi is commonly regarded as a buffoon and few would mourn his passing.
Yet the triumph of people power in Libya would resonate loudly around the region, not least in Algeria, serving both as a warning to regimes and as a beacon of hope to populations still longing for change.