Two RAF Hercules have flown about 150 oil workers from the Libyan desert to the safety of Malta, as protests against Colonel Gaddafi continue.
The rescue of Britons and other foreign nationals took place in territory controlled by Col Gaddafi's opponents, south of Benghazi.
Meanwhile, 53 Britons were among 100 on the last government-chartered flight out of Libya to Gatwick on Saturday.
It is thought about 300 British citizens remain in Libyan desert camps.
A Royal Navy frigate is heading to the port town of Benghazi, Libya's second largest city, to help with further evacuations.
'Military assets' BBC security correspondent Frank Gardner said the "extremely complex" operation to rescue civilians from the desert had taken days to plan.
"It was not just oil workers in one camp - they had to deal with several different locations and a number of heavily armed people," he said, adding that the operation appeared to have been carried out without co-operation from the Gaddafi regime.
Before the operation got the final go-ahead, British diplomats were flown out of Tripoli to Malta.
The Hercules landed on a desert strip that had been secured with the help of local militia.
It is thought more operations to reach stranded and vulnerable British oil workers may follow over the next few days.
Peter Dingle, from Lancashire, was among those airlifted out in Saturday's military operation.
"We found out early this morning that the Hercules was coming in but everything was being kept quiet," he told BBC Radio 5 live.
"We couldn't send e-mails out to any people or anything like that because obviously the media would find out that the British military was coming."
Civil engineer Tony Hooks, from Stirling, added: "We were aware of the dangers and we're just glad to get out.
"There are still people in the desert, so I can't say too much. I can't say where I came from. The guys down there are still doing an excellent job to gather all the guys together and get them evacuated."
Of the rescuers, he said: "There was the crew. There were no soldiers as such. They were not carrying any weapons, to my knowledge."
Defence Secretary Liam Fox confirmed the Hercules flights and gave detail of other evacuation efforts.

Frank Gardner BBC security correspondent
Continue reading the main story
Over the last few days PJHQ, which conducts all British military operations, have been working flat out over this plan, together with elements of special forces.
They established an air-head on the desert floor deep inside Libya, got everybody on and took off.
That begs the question, why can't they carry on doing that? I'm told the answer is it's dark.
So far there doesn't seem to have been any kind of fighting or bloodshed.
This morning we were told there were about 500 British nationals in Libya, mostly in camps.
About 300, maybe more, are left. So it's much too early to celebrate.
They have come up with a plan which seems to be working but is not over yet.

"HMS Cumberland is on her way back to Benghazi to evacuate any remaining entitled persons from there," he said.
"HMS York has arrived in Valletta to take on board stores so it can assist the evacuation effort if required. And a number of other military assets remain available to support the FCO-led efforts to return civilians from Libya."
A statement from the Foreign Office said the Hercules passengers had been met by a team of consular officials and Red Cross staff in Valletta, where they would be helped before returning to Britain on a government-chartered plane on Sunday or Monday.
'Horrific time' Much of Libya, especially the east, is now controlled by anti-Gaddafi forces but the Libyan leader still controls Tripoli, home to two million of the country's 6.5 million population.
The air evacuation got under way as the UN Security Council met to consider action against Col Gaddafi's government over its attempts to put down the uprising.
It proposes referring Col Gaddafi to the International Criminal Court for alleged crimes against humanity.
The UN estimates more than 1,000 people have died in the 10-day revolt.
The global body's World Food Programme has warned that the food distribution system is "at risk of collapsing" in the North African nation, which is heavily dependent on imports. 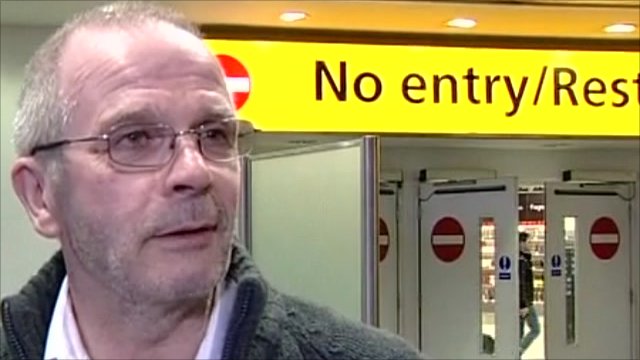 Click to play
Click to play
Britons returning to UK: "Our camp was raided by a marauding gang"
Also on Saturday, Britons who had managed to reach Benghazi and leave Libya on HMS Cumberland arrived at Gatwick airport after being put on flights in Malta.
Alan Burnett, a surveyor, said: "We went through a horrific time. Our camp was raided by a marauding gang. If it wasn't nailed down they were taking it, laptops, whatever.
"You couldn't argue with five or six people with machetes. I'm not going to criticise the government, they may have been late but the response when it happened was excellent."
Paul Ellis, an engineer, said the camp that he lived on "was just ransacked and anything of any value was just taken, like laptops and phones. I was quite lucky they didn't take mine.

Continue reading the main story
"One night groups of young Libyans came with knives.
"We went to a building and a lady looked after us. And every time they tried to break the door down she answered it and they went away, probably for religious reasons."
Meanwhile the British Embassy in Tripoli has suspended operations and its staff have departed the country.
The Turkish government still has a presence in the city and will temporarily represent British interests in the country, the FCO said.

Do you have relatives who have managed to leave Libya? You can send us your experiences using the form below.
Posted by Terrobuster at 7:48 PM