Snipers rule the streets in the besieged Syrian city of Homs 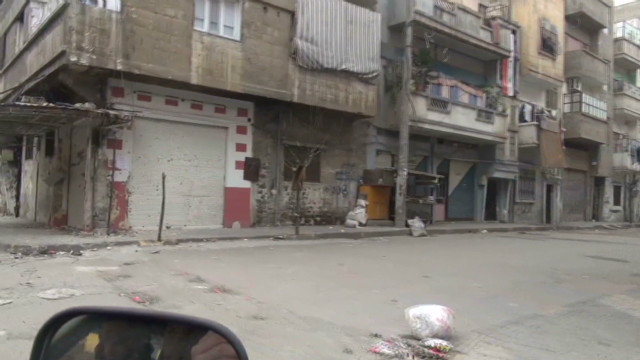 Exclusive: Government snipers prowl Homs
STORY HIGHLIGHTS
Homs, Syria (CNN) -- For months, the Syrian city of Homs has been the focus of opposition to the regime of President Bashar al-Assad, with almost daily protests since the summer.
More recently, defectors from the military have begun organizing armed resistance. Meanwhile, government forces have tightened their siege of rebellious neighborhoods that are now under the control of the opposition.
A freelance journalist and filmmaker -- who is not named for his own security -- has just left Homs, and over the next few days CNN will be showcasing his remarkable stories from the front lines of a city at war.
Among the bullet-scarred walls of neighborhoods under siege, he encountered the government snipers who prowl the city picking off their victims apparently indiscriminately and at will.
He found snipers stationed on almost every main street, manning checkpoints on both sides and firing at anybody crossing the street between 4 p.m. and 8 a.m. the next day -- imposing a kind of unofficial curfew.
He spoke to one woman whose daughter was seven months pregnant when she was shot in the head as she tried to venture out of the house to do some shopping. The snipers kept shooting as relatives tried to reach the pregnant woman where she lay dead in the street, before finally they were able to bring her body back to her mother's home.

To film what was going on, the journalist too had to risk his life on the streets of Homs, with about 1 million inhabitants the country's third-largest city.
View his images in hi-res
"I had to cross several times exactly the same streets where people got shot several minutes before. And you arrive at a scene where half an hour ago someone got shot and 30 minutes later people are crossing the street normally," he said.
"Me crossing the street, I was feeling literally that the sniper is aiming at me and it is up to him if he is going to pull the trigger or not."
Residents describe the daily struggle of life in the cross-hairs, some telling how they throw bread and other supplies across the street to others who cannot safely traverse to reach a shop.
A monitoring mission from the Arab League arrived in the city Tuesday but opposition activists fear they will not see the full extent of a brutal government crackdown that the United Nations says has claimed more than 5,000 lives nationwide.
Despite the days-long military siege, thousands turned out for anti-government demonstrations as the Arab League team entered the city.
The fact-finding team is monitoring an Arab League initiative that calls for Al-Assad's security forces to withdraw from cities, release detainees and end violence.
But from what he has seen in Homs, the journalist thinks the point of no return has already been reached. So many people have been killed already that those going out to protest don't believe the authorities would let them live even if they stayed at home, he said.
His is a rare insight into the realities of the situation in Homs. The Syrian government has limited journalists' access to the country since its crackdown on protests began, making it impossible to verify many reports. Most information has come from activist groups seeking to keep the world informed of the ongoing violence. They put the death toll at more than 6,000.
The unrest began in March when protesters, emboldened by democracy movements in Tunisia and Egypt, called for open elections and an increase in political freedoms, and demanded an end to brutal regime actions.
The movement quickly spiraled into a call for the ouster of al-Assad, and the regime cracked down on peaceful demonstrators. The government says it is combating "armed terrorist groups."
Posted by Terrobuster at 10:06 PM