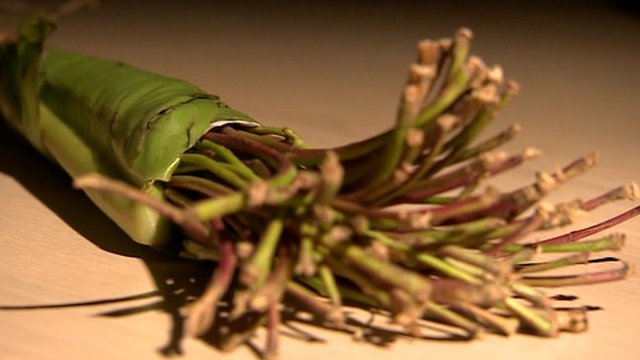 Birmingham Somali community leader 'backs khat ban'
The government should reverse its decision to ban the herb khat because it "has not been taken on the basis of evidence or consultation", MPs say.
Home Secretary Theresa May wants to re-grade the plant, a stimulant popular among Yemeni and Somali communities, as a class-C drug.
But the Home Affairs Committee say this is contrary to scientific advice that it causes no social or medical harm.
The UK could become a khat-trafficking hub if it is not banned, ministers say.
The home secretary announced in July that the plant would be controlled under the Misuse of Drugs Act.
This came after the Advisory Council on the Misuse of Drugs concluded in January that it should not be banned, as there was "insufficient evidence" it caused health problems.
'Potential friction' The government's Frank drugs advice website warns that khat, which is said to give users a feeling of alertness and happiness, can also cause insomnia, high blood pressure and constipation and suppress the appetite.
But the Home Affairs Committee's chairman, Labour MP Keith Vaz criticised the government's stance, saying: "It is extremely worrying that such an important decision has not been taken on the basis of evidence or consultation.
"The expert Advisory Council on the Misuse of Drugs conducted a thorough review of the evidence and concluded that no social or medical harm resulted from the use of khat. We support the advisory council's findings."
Mr Vaz said the best solution would be to introduce a licensing system for importers as a "middle way" between unregulated trade and an outright ban.
He added: "The UK should not become a hub for the distribution of illegal khat. It is wrong to place legal importers in the impossible position of choosing between a life of potential hardship or one of crime.
"It is baffling that potential friction, between already disadvantaged communities and the police, has not been fully considered."
Mr Vaz also warned that a ban in the UK could result in an increase in membership of the Somali militant group al-Shabab among young men previously employed in the khat trade.
About 2,560 tonnes of khat, worth £13.8m, was imported to the UK in 2011-12.
It is already banned in most of Europe and in a number of other countries, including the US and Canada.
Mrs May announced her decision to ban it in July, saying that, otherwise, the UK risked "becoming a single, regional hub for the illegal onward trafficking".
People caught in possession of a class-C drug can be sentenced to up to two years in prison and face an unlimited fine. Dealing or supplying can mean up to 14 years in jail.