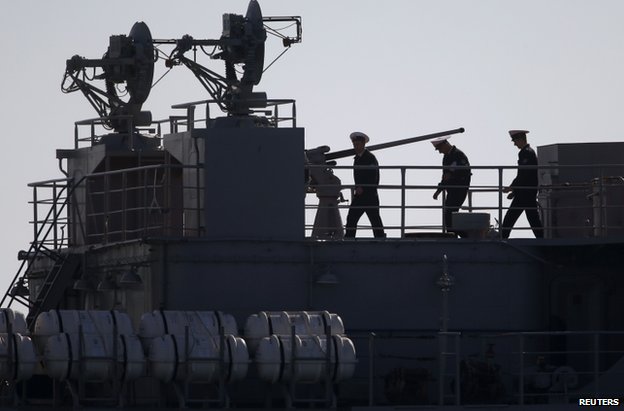 The fate of Ukraine's navy is still being decided
Moscow has described further EU sanctions against prominent Russians over its annexation of Crimea from Ukraine as "detached from reality".
The foreign ministry said Russia reserved the right to an "appropriate response" after Brussels expanded its black list from 21 to 33 names.
Those on the list, who include close allies of President Vladimir Putin, face asset freezes and travel bans.
Meanwhile international observers are set to deploy in Ukraine.
Advance teams from the Organisation for Security and Co-operation in Europe (OSCE) are due to visit areas that include the troubled south-east after Russia dropped its objections.
However, the 100-strong OSCE Mission is not expected to go to Crimea.
Russia argues that Crimea has become part of Russia and therefore the mission has no mandate to go there.
In Crimea itself, forces allied to Russia continued their attempts to seize Ukrainian navy property on Saturday.
A pro-Russian crowd stormed the regional naval air base at Novofederovskoe, near Yevpatoria on the western coast, tearing down Ukrainian symbols, overturning furniture and looting, the BBC's Mark Lowen reports from the scene in a tweet.
The Ukrainian commander shouted "this is our base" as his men tried to drive the crowd back using smoke, our correspondent says.
In the Crimean capital, Simferopol, a joint funeral was held for a Ukrainian soldier and a Russian Cossack militiamen killed this week in a shooting - the only known victims of what was otherwise a bloodless takeover of Crimea by Russia.
The van carrying their coffins was escorted by bikers flying Russian and Crimean flags. The Crimean authorities are still investigating the shooting at a base in the city on Tuesday.
'Regrettable' move On Friday, the EU announced sanctions against 12 Russians including Deputy Prime Minister Dmitry Rogozin, State Duma speaker Sergei Naryshkin, Kremlin political strategist Vladislav Surkov and Mr Putin's top adviser on Ukraine, Sergei Glazyev. 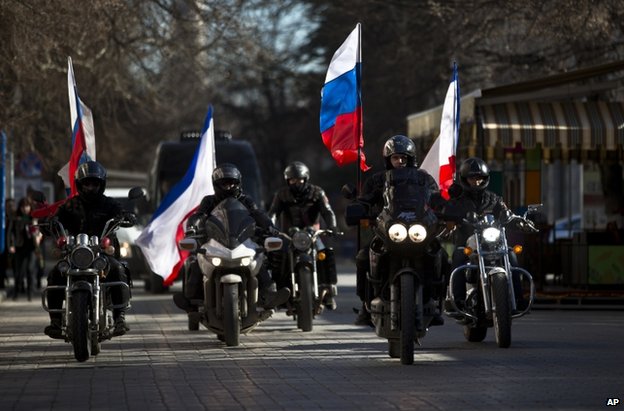 Bikers escorted a van carrying the coffins of two men shot dead in Crimea this week, through the streets of Simferopol. 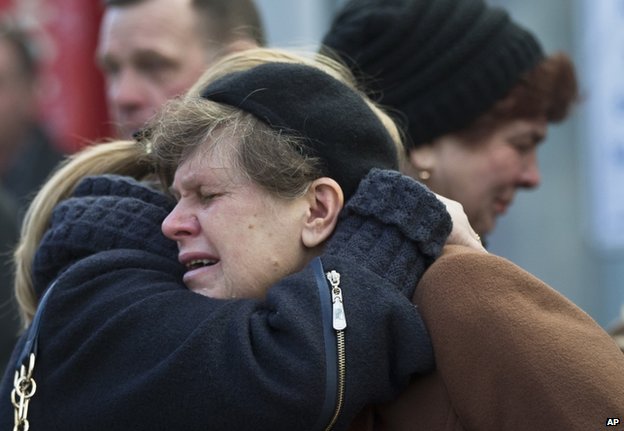 Relatives of Ukrainian soldier Sergey Kokurin grieved at his funeral

All four men are already under US sanctions for their involvement in the crisis over Crimea.
The Russian foreign ministry said in a statement on Saturday that the European Council's decision to impose the sanctions was "regrettable" and "detached from reality".
It called for both sides to return to a "pragmatic basis for co-operation that meets our countries' interests" but warned that Russia reserved "the right to give an adequate response to the action taken".
President Putin signed a law formalising Crimea's annexation on Friday, despite the sanctions and international outcry over his actions in Ukraine.

The OSCE, which has 57 member-states in both Europe and North America, reached a deal on dispatching observers on Friday evening.
The Vienna-based group said that initially 100 civilian observers would deploy for six months in nine regions of Ukraine. Up to 400 extra personnel could be deployed if necessary.
The areas the monitors are due to visit include Odessa, Donetsk, Dnepropetrovsk, and Luhansk, which have been recently rocked by clashes between pro-Ukrainian and pro-Russian activists.
Washington tried to argue that the mission had a "mandate to work in Crimea and in all other parts of Ukraine".
On Saturday, the Russian foreign ministry said: "The mission's mandate reflects the new political and legal realities and does not apply to Crimea and Sevastopol, which became a part of Russia."
It said it hoped the mission would "help to overcome the internal Ukrainian crisis, stop rampant nationalist banditry and eradicate ultra-radical tendencies".
Earlier this month OSCE monitors had to abandon attempts to visit Crimea after warning shots were fired at the border with the Ukrainian mainland.

Posted by Terrobuster at 6:54 AM