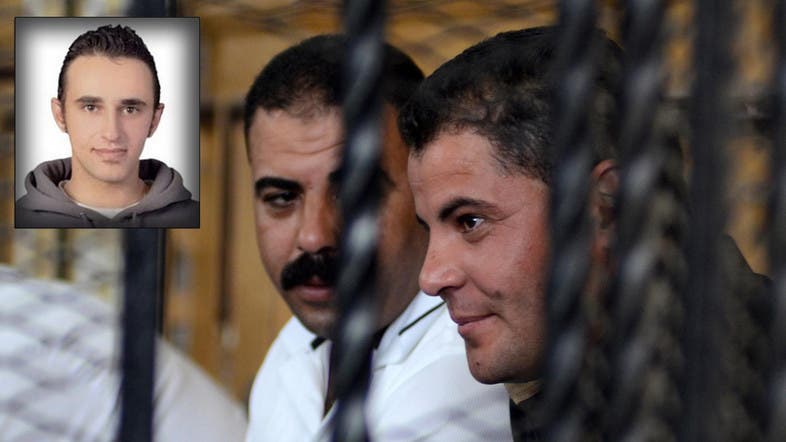 Egyptian police officers Awad Ismail Suleiman (L) and Mahmud Salah Amin, sentenced to 10 years in jail for the killing of blogger Khaled Said in 2010. (File photo: AFP)
Text size A A A
AFP, Alexandria
Monday, 3 March 2014
Two Egyptian policemen were sentenced to 10 years in jail Monday for the killing of a blogger whose death rallied protesters in the 2011 revolt that toppled Hosni Mubarak.
The two were sentenced following a retrial for the manslaughter and torture of Khaled Saeed in June 2010, when they had unlawfully arrested him at an Internet cafe in the Mediterranean city of Alexandria.
The two police, Mahmoud Salah Mahmoud and Awad Ismail Suleiman, had initially been sentenced to seven years in October 2011 for excessive brutality.
Saeed’s death galvanized protests against then-president Hosni Mubarak, after pictures emerged online of the 28-year-old’s mangled face.
The government further enraged Mubarak’s opponents when it tried to cover up the killing by alleging he choked on a bag of drugs.
A Facebook group entitled “We are all Khaled Saeed” helped organize the 18-day protests that drove Mubarak’s hated police force from the streets and forced him to resign in February 2011.
The sentencing comes amid renewed popularity for the police, who supported the ouster of Islamist president Mohamed Mursi in July, and a pattern of acquittals for policemen tried for killing protesters during the anti-Mubarak revolt.
Both defendants were in a caged dock when judge Ismail Attiya delivered the verdict. They showed little emotion on hearing the sentence.
Their lawyer said he would appeal the verdict, and relatives yelled at police outside the court room: “You sold out your men!”
Mahmoud Abdel Rahman, a lawyer for Said’s family, told AFP “justice has been delivered for all” and that the verdict sent a message of “deterrence to a powerful institution.”
Police and the forensic authority had initially said that Said choked to death after swallowing a packet of drugs.
Another forensic report later said he died of asphyxiation after being beaten, and that the packet of drugs was thrust in his mouth when he was unconscious.
Pictures of Said’s badly bruised face after his death spread on the Internet, and his case became synonymous with police brutality under Mubarak.
Said’s supporters and opposition activists have often clashed with security forces, in particular during the trial hearings.
In January, seven activists were sentenced to two years in prison for a violent and unlicensed protest outside the court hearing the Said case.
Since Morsi’s ouster, the military-installed government has pressed an extensive crackdown on protests, mainly those of his Islamist supporters, frequently setting off violent street clashes.
At least 1,400 people have been killed in clashes since Morsi’s overthrow, most of them Islamists.
Three years after the overthrow of Mubarak, Egypt's police again faces accusations of brutality and ill treatment in detention centers, which the interior ministry has denied.
The police and army have meanwhile come under frequent attack by jihadist militants, mainly in the restive Sinai Peninsula, with dozens killed since Mursi’s ouster. On Monday a policeman was shot dead in the town of Beni Suef, south of Cairo.