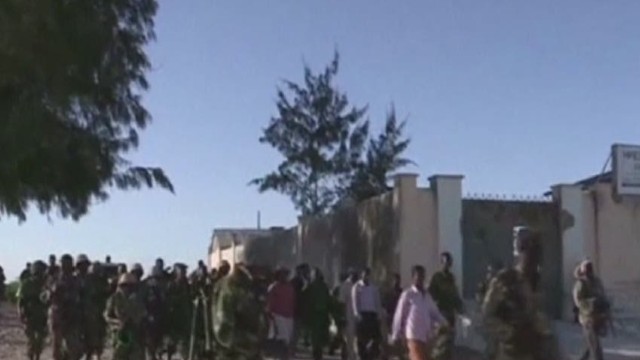 STORY HIGHLIGHTS
Mogadishu, Somalia (CNN) -- A Quran teacher in central Somalia was the fifth beheading victim in one week at the hands of Al-Shabaab, the al Qaeda-linked militant group based in Somalia.

"The Quran teacher was snatched from his house in Qandho by Al-Shabaab militants on Friday and they dumped his headless, beheaded body near his home town on Saturday morning," local town spokesman Abdiaziz Durow told CNN.
The teacher was identified as Mohamed Hussein, 45, a resident of the Qandho near the besieged town of Bulo Burde, 217 miles north of Mogadishu in central Somalia.
"The reason the Quran teacher was murdered is that he was one of the few residents that refused orders from Al-Shabaab to leave his village that was recently seized by Somali and AU troops," Durow said.
Al-Shabaab had warned local residents to leave their houses in the towns they have seized, according to Durow.
Last week, the militant group abducted and beheaded two Somali policewomen in the city of Teyeglow, located in the southwest region. The beheadings prompted a government soldier whose wife was among the victims to kill five Al-Shabaab wives in retaliation.
Al-Shabaab also beheaded two government soldiers near the town of Bur Hakaba in the Bay region in south Somalia.
Al-Shabaab is a Somali group that was designated as a foreign terrorist organization by the U.S. government in March 2008. It is seeking to turn Somalia into a fundamentalist Islamic state.
The group is believed to be responsible for attacks in Somalia that have killed international aid workers, journalists, civilian leaders and African Union peacekeepers.