The joys of investing in Somaliland 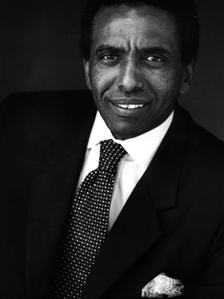 Mr Yusef says potential profits are higher in Somaliland than London
"How are you going to make money in a country that doesn't even exist?" That was probably the question that many people had at the back of their minds when Mohammed Yusef told them he would invest in Somaliland.
Others perhaps did not even know Somaliland had declared independence from Somalia in 1991 and that, in spite of not having been recognised internationally, it does have - unlike Somalia - a working political system and a strong business sector.
Mr Yusef of course knew. Although he now manages a very successful investment firm in the United Kingdom, Invicta Capital Limited, he has always kept in touch with the land where he was born six decades ago, while it still was a British protectorate.
"If what my parents say is true, I always had a mentality for trade, for business, and it's not inconsistent with the family history because the family originated from a fishing village on the Gulf of Aden," he told the BBC's series African Dream.
"My great-grandfather was one of those people that would trade with Aden."
Mr Yusef was educated in the UK where he trained as a solicitor and practiced as a commercial lawyer before starting his own law practice specializing in commercial law, copyright and media law in London.
In 1999 he founded Invicta, a private equity firm providing finance for the media, commercial property and renewable energy sectors which, according to its website, has raised over £1.4bn ($2.3bn) of investment capital.
Minding the gap His Somaliland business is handled through a company called Prime Resources which has a staff of nine people in Hargeisa, the capital.

According to him, the firm has invested in mining, and oil and gas exploration and is about to embark on a $40m exploration programme. It is also evaluating business opportunities in Somalia in the agricultural and property sectors.
"When I first started looking at investment in Somaliland even my professional colleagues would say: 'You're mad. This doesn't make any sense'," he remembers.
"Not only did they confuse Somaliland with Somalia but it does have the problem of being an unrecognised country," he told the BBC's Mary Harper.
"But actually nobody ever made money from following the herd and the most money is often to be made where there is a mismatch between what people perceive to be the place and the reality of what it is, and Somaliland is exactly in those kinds of circumstances where there is a huge gap between the reality and the perception."
"So actually there is a method to my madness and it isn't inconsistent with the basic principles of business: Go find yourself a situation that nobody else has spotted and be prepared to hang on in there while everybody else catches up."
"There is no inconsistency between what we look for when we invest in an opportunity here [in London] and what we look for over there, except that the potential rewards in Somaliland are far greater, ironically."
The Hollywood connection Mr Yusef's first business venture was buying and selling a film library.

Jump media player
Media player help
Out of media player. Press enter to return or tab to continue.
"I was lucky in that I knew who my buyer was going to be, so it was one of those crazy situations where I knew I could buy for X and sell for Y," he said.
"In many ways, it's the worst first lesson to have in business because you run away with the idea that business is actually quite easy."
However, this experience was probably helpful to him when, later, he decided to specialise in structured film financing.
Invicta has been involved in the financial side of many successful film projects, including Wallace & Grommit: Curse of the Were-Rabbit, Da Vinci Code and James Bond's Casino Royale.
Although now he manages big money, Mr Yusef says that he started with very little.
"I had enough capital to pay the rent of an office for six months. I think it was enough to pay the secretary and assistant. That was it.
"But it didn't take much. It never takes much. Not having money is never really the obstacle, it's the excuse."
'Fascinating people' Mr Yusef says that for him one of the most exciting things about his business is meeting people.
"You meet fantastic people, even the ones you don't like. They're fascinating".

The biggest driver for people in business, if you look at it, is the creative drive, to create something from nothing and step back and say: 'That was nothing then, look at it now'”

Continue reading the main story
He believes that it is often easier to get to know others in stressful situations because they cannot "keep their pretences up for very long".
He also takes delight in the intellectual challenges offered by his job.
"Every situation is different from the last. And the mistake often made is to assume 'Oh, I know how that story is going to end'. So there's always that tension - positive stress is what I call it - that keeps one going," he says.
"After a while, it may sound a bit glib to say this, the money motive isn't the main driver. Once you've reached a certain level of security - you've paid the mortgage if you still had one and taken care of the basics of life, and you can afford one or two luxuries - people who accumulate businesses and business interests just to make more money are a little bit unwell, I think.
"The biggest driver for people in business, if you look at it, is the creative drive, to create something from nothing and step back and say: 'That was nothing then, look at it now'. I'm sure that's the key motivator for most people who are successful in business."
And what advice would he give to someone who wants to start in business?
"Control your fear and never give up because you will fail more than you succeed, and I think that's the thing that my father taught me more than anything else, and that's that ultimately you will prevail if you take your losses as well as your successes and learn from the losses. We learn nothing from success and everything from failure.
"I think the thing that separates the natural businessman and, let's say, a business consultant, is the tenacity that is required. Many people give up on their dreams and their ideas faster than they should, and even when they do fail, they should figure out why they failed and then look for the next opportunity."

African Dream is broadcast on the BBC Network Africa programme every Monday morning.
Every week, one successful business man or woman will explain how they started off and what others could learn from them.
Posted by Terrobuster at 3:58 AM