Artist Creates The Most Amazing Drawings Without Using Any Kind Of Paint Or Drawing Substance! | BuzzWok.com | The Best Buzzing Stories Frying In One Place (Buzzwok) 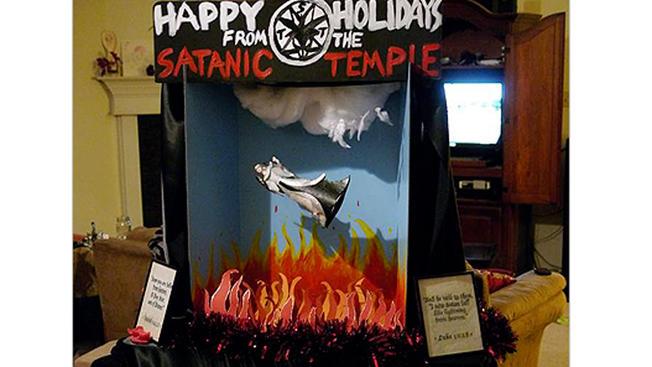 5.4K5059
Tags
Human rights, Religion, Scandal, USA
The Satanic Temple is claiming a religious freedom victory after winning the right to erect a fallen angel holiday display in Miami. Now it wants to put up a statue of pagan idol Baphomet in the Oklahoma state capitol next to one of the 10 Commandments.
The cardboard display in the Florida state capitol consists of a diorama of an angel falling from the sky into hell and an inscription, “Happy holidays from the Satanic Temple” atop of it. The stand is scheduled to be put up on Dec. 22, together with a “Happy Winter Solstice” banner from the Freedom From Religion Foundation and an entry from the Church of the Flying Spaghetti Monster. All the displays have been approved by the state government.
“We hope that, this holiday season, everybody can put their religious differences aside and respect that the celebratory spirit of responsible hedonism is available to all,” Lucien Greaves, spokesman for the Satanic Temple, said in an email to CBS Miami.
Last year the Florida Department of Management Services rejected the proposed holiday display from the New York-based Satanic Temple (not to be confused with Anton Szandor LaVey’s Church of Satan) because, according to the agency, the proposal was “grossly offensive during the holiday season.”
In 2013, the capitol’s rotunda did allow the display of a privately funded Pastafarian Flying Spaghetti Monster and a six-foot “Festivus pole” made out of beer cans, as well as displays from some atheist groups.
The temple continued demanding equal representation, with legal backing from Americans United for the Separation of Church and State threatening to sue the state of Florida for violating the temple's free speech rights. This year a Satanic display appeared in the capitol largely because “this time around we arrived with lawyers,” Greaves wrote in an email.
“In a nation that respects religious liberty, viewpoint discrimination is simply intolerable,” Greaves said in a statement. “For that reason, we feel our holiday display sends a very important, affirmative message that goes above and beyond that of superficial season's greetings.” The Satanic Temple has a broadly libertarian philosophy: it’s pro-choice, in favor of same-sex marriage and champions individual liberty.
The Satanic Temple also claims to be active in politics, “facilitating the communication and mobilization of politically aware Satanists.” The group made headlines earlier this year when it proposed to place a 2-meter-tall statue of Baphomet in front of the Oklahoma state capitol next to a statue of the 10 Commandments, citing their freedom of religion rights under the US Constitution.
READ MORE: Satanists unveil 7-foot monument they want to erect at Oklahoma Statehouse
“We embrace practical common sense and justice. As an organized religion, we feel it is our function to actively provide outreach, to lead by example, and to participate in public affairs wheresoever the issues might benefit from rational, Satanic insights,” the Temple says on its website.
Posted by Terrobuster at 12:28 AM