Why does Myanmar keep persecuting the Rohingya Muslims?

An internally displaced Rohingya woman holds her newborn baby surrounded by children at a camp for Rohingya people in Sittwe, Myanmar. (Gemunu Amarasinghe / AP)
By The Times Editorial Board contact the reporter
EditorialsOpinionIllegal ImmigrantsImmigrationCivil and Human RightsUnited Nations
The United Nations considers the Rohingya one of the most persecuted groups in the world
For years, the government of Myanmar has treated its Rohingya Muslim people as intruders — an impoverished minority among a Buddhist majority, considered illegal immigrants, restricted in where they can live and work. The United Nations considers them one of the most persecuted groups in the world. Even as Myanmar has liberalized its political system, moving from military rule to democracy, the government has declined to ease its treatment of the Rohingya despite constant urging to do so by the human rights community and U.S. officials. 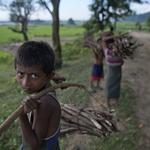 Editorial
The plight of Myanmar's Rohingya

See all related
8
This is not a path to citizenship, it.s a path to indefinite detention. -
Now Myanmar is responding to the continued calls for change with a proposed "Rakhine State Action Plan." But what the government claims is an attempt to address the statelessness of the Rohingya only further institutionalizes its discrimination against them.

cComments Add a comment See all comments
13
Currently, the Rohingya are not eligible for full citizenship unless they can meet the nearly impossible requirements of the country's 1982 Citizenship Law — including tracing their family history in Myanmar back to the days before British colonization in 1823. Few have the necessary documents to do so. Most of the 1 million Rohingya live in Myanmar's western Rakhine state; an estimated 180,000 of them were driven from their homes there by waves of sectarian violence against them in 2012, ending up in squalid displaced persons camps.

Myanmar Census enumerators walk along with police officers to collect information at Dar Paing camp for Muslim refugees in north of Sittwe, Myanmar. (Khin Maung Win / AP)
Myanmar considers the Rohingya to be immigrants from Bangladesh and West Bengal, even though most are not recently arrived. They are the descendants of families that lived in Myanmar well before it became independent in 1948. Some historians believe there are Rohingya who are indigenous to Rhakine state, but most Rohingya originally migrated from the Bengal region in the 19th and 20th centuries. In any case, they are not foreigners and should not be treated as such.
The government's misguided new plan would require all Rohingya to declare themselves Bengali (which they say they are not) and then try to prove they're eligible for citizenship by the standards of the 1982 law. Those who fail to meet the standards would be put into what Myanmar calls "a resettlement zone." Those who refuse to go through the process would be assigned to a displacement camp.
This is not a path to citizenship, it's a path to indefinite detention. Myanmar should scrap it and revamp its citizenship law to recognize the historic roots of the Rohingya in the country.
Follow the Opinion section on Twitter @latimesopinion
Copyright © 2014, Los Angeles Times
Posted by Terrobuster at 7:21 AM