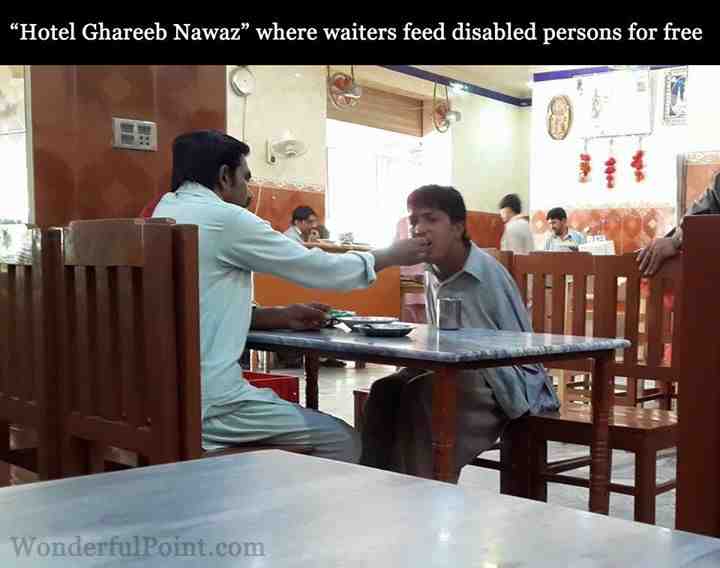 The Hotel Ghareeb Nawaz feeds the homeless and disabled.
I came across this inspiring story of a hotel/restaurant in Pakistan that feeds the poor and homeless for free. It touched me, so I am sharing it here. – Wael
By Sarfaraz Memon
Reprinted from Pakistan’s Express Tribune
SUKKUR, PAKISTAN: For Mai Jindo, the Gharib Nawaz Hotel is nothing less than a blessing as the hotel has been providing free meals to her family for more than 35 years now.
“Like a majority of the girls of my community, marriage proved a gamble for me, as my husband turned out to be a drug addict and, instead of providing livelihood to the family, has always remained dependent upon me”, Mai Jindo told The Express Tribune. “It was very hard for me to earn enough to feed so many mouths but I kept on trying.”
Her initial struggles were soon eased. “One day a woman in my neighbourhood told me about the Gharib Nawaz Hotel, near the Sukkur Clock Tower, which provides free meals to the poor and needy,” she said. “In the evening, I went to the hotel along with my four children and to my surprise, the hotel owner gave me so much food that it was enough for my family for dinner and even breakfast the next day. Since then, I come to this hotel every evening to get food for my family and now I don’t have to worry about feeding my family at least.” 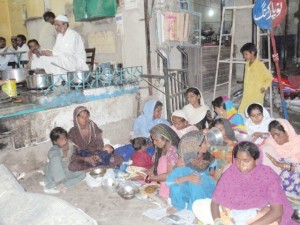 Poor families eating for free at the Hotel Gharib Nawaz.
Kamalan is also one of the regular visitors of the hotel. “Considering the high prices, poor people like us cannot afford to feed our children regularly but thanks to the Gharib Nawaz Hotel, we do not have to face hunger,” she said. “Hundreds of men, women and children visit this hotel in the evening to get free food for their families.” Kamalan is a widow and has seven children to take care of and though she works as a maid in two houses, she doesn’t earn enough to make ends meet.
Mashooq Ali used to earn a livelihood for his family through a donkey cart and while he was unable to afford the extravagant, he was doing sufficiently well enough for himself. But everything changed when Ali lost his left arm in an accident five years ago. He has been unable to work since then.
“I don’t have a son, otherwise I wouldn’t have come to this hotel,” he said, his pride hurt at being forced to accept charity. “I cannot let my five daughters die of hunger, therefore, I come to this hotel and get food for them.”
The owner of the hotel, Haji Shabbir Ahmed, told The Express Tribune that the hotel was established before the partition and was named the Gharib Nawaz [the carer of the poor] by his forefathers. “Since its establishment, it has been our practice to provide free food to the poor,” he said. “And with the passage of time, people have started giving money to us as charity to provide free food to more people. Now we can provide for hundreds”
The Gharib Nawaz Hotel is not the only hotel that provides free food to the poor but it is famous for its cheap rates even for those who can afford to pay. Most of the labourers working in the nearby markets come to the hotel to eat meals at the comparatively low rates and Ahmed said that due to the low rates, profits are a bare minimum. However, the owner is more than happy with the business model, saying that their main priority is to help the poor and not to make large profits.
Posted by Terrobuster at 11:01 PM