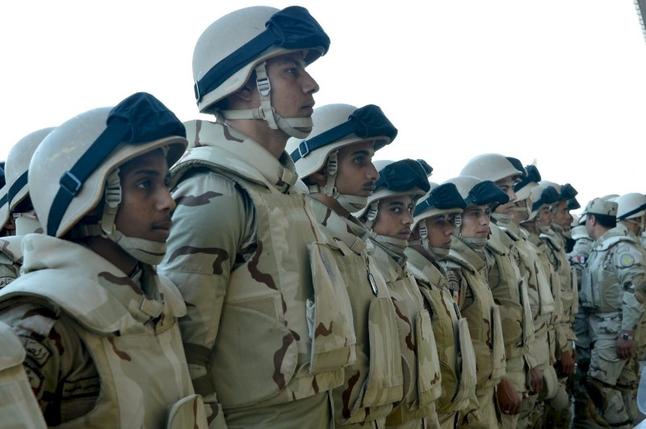 Troops arrive to participate in joint military exercises in Hafr Al-Batin, near Saudi Arabia's border with Iraq in this handout photo by Saudi Press Agency released on February 16, 2016.
Reuters/Saudi Press Agency/Handout via Reuters
The Middle East's largest ever war games are now underway and will boost military cooperation between the 20 Muslim nations taking part, host country Saudi Arabia said on Monday, as it seeks to check the growing influence of arch rival Iran.The Northern Thunder exercises, which began on Feb. 14 and will run until March 10, involve more than 150,000 troops from the Gulf Arab nations, Egypt, Morocco, Pakistan, Bangladesh, Jordan, Sudan and Senegal.
"The council of ministers ... expressed the hope that these exercises achieve what was defined as their goals in exchanging expertise and raising the level of military coordination," Saudi Arabia's cabinet said in a statement.
The statement also praised "the levels of preparedness and administrative and supply capabilities" shown by the nations participating in Northern Thunder exercises.
Sunni Muslim Saudi Arabia is concerned by the growing regional clout of Shi'ite Iran, which has just emerged from years of international economic sanctions following an international deal over its nuclear program.
Riyadh, which is contributing the bulk of the troops in the war games, is also worried by the reduced regional role of its key ally, the United States and is seeking to build alternative military alliances as a counterweight to Iran.
Saudi Arabia is leading a coalition of Muslim countries, backed by the United States, Britain and France, in a war in neighboring Yemen and says it will contribute troops if Washington leads land operations against Islamic State in Syria.
Its war in Yemen, aimed at restoring a government ousted by an Iran-allied militia, is part of a more assertive effort by Riyadh since last year to counter Tehran's influence.
(Reporting By Angus McDowall; Editing by Gareth Jones)