World News | Sun Aug 14, 2016 9:37am EDT
A still image from a video posted by Nigerian Islamist militant group Boko Haram on social media, seen by Reuters on August 14, 2016, shows a masked man talking to dozens of girls the group said are school girls kidnapped in the town of Chibok in 2014. Social Media 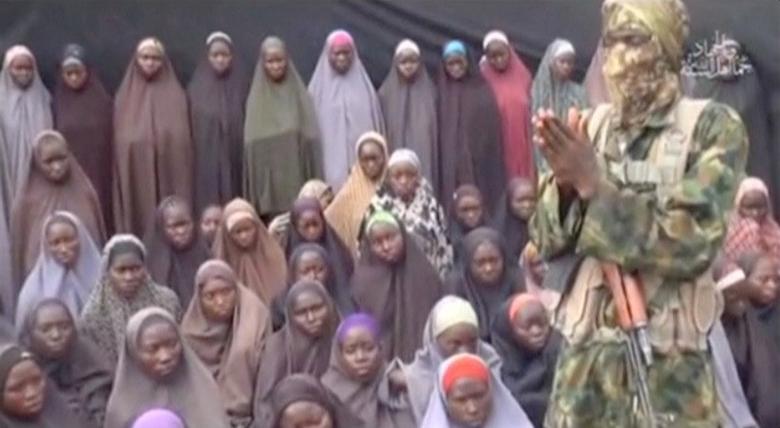 Nigerian militant group Boko Haram has published a video apparently showing recent footage of dozens of school girls kidnapped two years ago, and saying some of them have been killed in air strikes.Dozens of the girls who were abducted in the town of Chibok in 2014 managed to flee to safety in the initial melee, but more than 200 are still missing.
Nigerian authorities said in May that one of the missing girls had been found and President Muhammadu Buhari vowed to rescue the others.
In the video published on social media, which was seen by Reuters on Sunday, a masked man stands behind dozens of girls, one of them identified as Maina Yakubu, who tells him she is from Chibok. She is veiled in the video.
"What I want to tell my parents and the federal government is that the federal government should please release Boko Haram members in custody of security agents so we too can be released," she said.
"Military jets have killed some of the girls," she said.
The fighter also said some girls had been killed by air strikes. At the end of the video unidentified bodies could be seen on the ground.
The was no immediate comment from the Nigerian army.
Boko Haram, which last year pledged loyalty to the militant group Islamic State, has kidnapped hundreds of men, women and children in their campaign to carve out an Islamist caliphate.

Under Buhari's command and aided by Nigeria's neighbors, the army has recaptured most territory once lost to Boko Haram, but the group still regularly stages suicide bombings.
Boko Haram has apparently split with Islamic State naming Abu Musab al-Barnawi two weeks ago as the group's leader for West Africa in a two-page interview in its weekly magazine.
But the previous figurehead Abubakar Shekau appears to have rejected the new role in another video published after Barnawi's appointment.
(Reporting by Sharon Ogunleye, Ardo Abdullah and Ulf Laessing; Editing by Helen Popper)