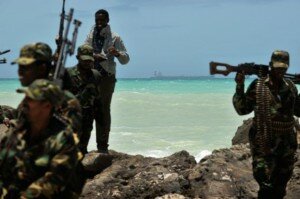 An un-named Muslim country is funding the creation of a well-armed and privately trained militia force in Somalia’s north to fight piracy, the AP reports today.
And behind the scenes consulting are the George W. Bush administration’s former ambassador at large for war crimes, Pierre Prosper, and former CIA deputy station chief in Mogadishu Michael Shanklin.
The force has already trained its first recruits (Saracen, a private security firm, is taking the lead) and recieved its first shipment of weapons. And most incredibly of all, it will have air support — something that no military force in the country currently has, even the U.N. peacekeepers.
If it weren’t for WikiLeaks, this might well be front-page news.  For the last two years, the international community has been trying to do two things: train a decent government army to defend the country from Islamist militant groups that now control much of the country’s southern territory, and end the epidemic of piracy that has plagued the Somali coast. This donor Muslim nation now seems more serious (and more willing to pay) for both things in one sweeping blow, creating what may soon be Somalia’s best functioning military force. As AP reporter Katharine Houreld points out, he who holds the gun makes the rules in Somalia.
I can’t speculate with any authority on which country is behind this rather game-changing feat. But I will say that one of the region’s most active ports, Dubai, sends a lot of cargo through the pirate plagued Gulf of Aden.
Then again, we learn from Wikileaks that Egypt has urged the U.S. Joint Chiefs to ”focus counter piracy efforts on the Somali shore.” But equally of question is whether the United States knew about this and was on board. The State Department today expressed concern about the report. The United Nations was apparently cut out entirely; they are reported to be investigating a possible breach of U.N. weapons sanctions by the ongoing training.
It wouldn’t be the first time that Washington and the United Nations were behind the curve in Somalia.
=========================
Source:- Foreignpolicy.
Posted by Terrobuster at 4:30 AM