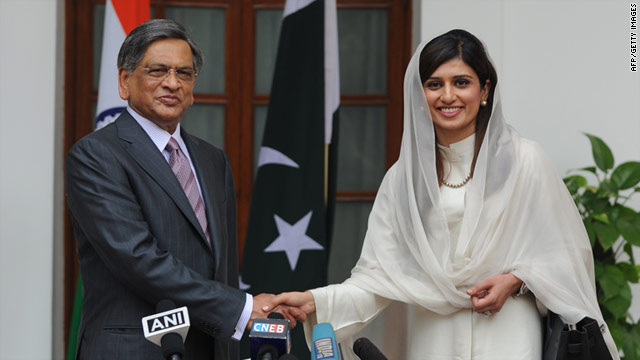 Pakistan Foreign Minister Hina Rabbani Khar shakes hands with Indian Foreign Minister S. M. Krishna prior to the meeting.
STORY HIGHLIGHTS
New Delhi (CNN) -- India and Pakistan Wednesday pledged not to let their fragile peace process slide again because of thorny issues that have made the nuclear neighbors bitter enemies.
Pakistan's new Foreign Minister Hina Rabbani Khar met her Indian counterpart S.M. Krishna in New Delhi in an engagement that saw no major breakthroughs over outstanding disputes but a commitment to pursue dialogue.
Their talks came barely two weeks after three deadly explosions ripped through Mumbai, an attack that revived memories of the 2008 terror siege of India's financial hub. Pakistan was quick to condemn the July 13 bombings of Mumbai while New Delhi was careful not to finger Islamabad.
"This is indeed a new era of bilateral cooperation between the two countries and it is our desire, and I believe after having spoken to you mister foreign minister, that it is the desire and commitment of both the governments to make it an uninterrupted and uninterruptable process," Khar remarked, standing beside the Indian leader after their meeting.
In his comments, Krishna too acknowledged sustained negotiations were the way forward.
"We have reaffirmed our commitment to resolve all outstanding issues through a comprehensive, serious and sustained dialogue. While being fully cognizant of the challenges that lie ahead, I can confidently say that our relations are on the right track," he said.
"We have some distance to travel, but with an open mind and a constructive approach, which has been demonstrated in this round of dialogue, I am sure we can reach our desired destination of having a friendly and cooperative relationship between the two countries," Krishna added.
As part of their confidence-building measures, both sides agreed to double the frequency of trade across Kashmir -- the disputed region divided between the countries -- to four days a week. The current three-year agreement involves 21 locally made items, which a joint statement issued after the talks said would be reviewed for possible additions.
India and Pakistan have have fought three wars since the partition of the Asian subcontinent in 1947, two of them over Kashmir, which both nations claim.
"The ministers held discussions on the issue of Jammu and Kashmir and agreed to the need for continued discussions, in a purposeful and forward looking manner, with a view to finding a peaceful solution by narrowing divergences and building convergences," the joint statement noted.
Earlier this year, New Delhi and Islamabad agreed to resume peace talks frozen by the 2008 Mumbai strikes, which have been blamed on Pakistan-based militant groups.
Under U.S. pressure, Indian and Pakistani leaders held meetings last year in a bid to put their dialogue back on track, but no dramatic headway has been made.
In 2004, the nations agreed to negotiations that cover eight issues, including Kashmir, terrorism and Pakistan's concerns over river dams on the Indian side of the border, which it sees as a threat to its water supplies.
Since then, successive governments have held talks in an effort to end the historical acrimony.
Indian Prime Minister Manmohan Singh and Pakistan's President Asif Ali Zardari hailed results from the dialogue in September 2008 as the countries completed four rounds of diplomatic meetings.

But talks were suspended two months later, in November 2008, after the terror raid on Mumbai that left more than 160 people dead.
RELATED TOPICS
Posted by Terrobuster at 11:41 AM