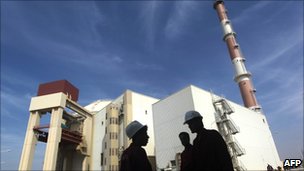 Iran insists its nuclear programme is for purely peaceful purposes


An Iranian nuclear scientist has been shot dead outside his home in Tehran, Iranian media sources say.
The Isna news agency named him as Daryoush Rezaei, 35, adding that his wife was wounded. His identity has not been officially confirmed.
In 2010, nuclear scientist Massoud Ali Mohammadi was killed by a remote-controlled bomb in Tehran.
Iran blamed that attack on Israeli secret service Mossad. Israel has long warned about Iran's nuclear programme.
Some reports said the latest attack involved assailants on a motorcycle, but this has not been confirmed.
Isna said that Mr Rezaei was an expert with links to the Atomic Energy Organisation of Iran.
'New provocation' The US, Israel and many Western nations have opposed Iran's atomic programme, fearing it may be a front to creating a nuclear bomb.
Iran insists its nuclear programme is for purely peaceful purposes.
This week, Iran said it was installing newer and faster centrifuges at its nuclear plants, with the goal of speeding up its uranium enrichment process.
Enriched uranium can be used for civilian nuclear purposes, but also to build atomic bombs.
The French government condemned the move as a "new provocation".