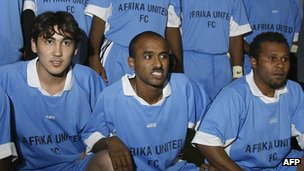 The Beijing-based Afrika United football team merged Franco and Anglo speaking teams in 2000
China's new leadership has made it clear that it is still committed to developing its interests in Africa.
The Chinese ambassador to South Africa has said the relationship "will enter a new stage of development" and China will always be "a good brother of the African people".
China's embrace of Africa in recent years has boosted trade volumes and foreign investment, and provided new infrastructure.
Business links between China and Africa may be cordial and efficient, but it does not mean that friendship and mutual liking necessarily follow in their wake.
There have been anti-Chinese sentiments in Zambia over the treatment of African workers in Chinese-run mines and rising hostility to Chinese immigrants in other African states.
Xenophobia The relationships between Africans and Chinese, either in Africa or China, are full of conflicts and subtleties.
Lebogang Rasethaba is a young South African film producer who took advantage of one of the scholarships China offers to Africans to study in China.
"I don't think there are many scholarships for Africans to go to America or Europe. If you go to China you give yourself a competitive edge over your counterparts," he says.

Continue reading the main story
"There is not much of a cultural dialogue between China and Africa. Only now people are starting to realise that in order to do business with each other we have to get each other at a cultural level," he says, "That is why there is now this need for this cultural conversation."
"I have only ever made films about Africans in China, and the reason I chose to do that was because I thought there are a lot of issues about Africans that were specific to China," he explains.
Having been confronted with the perceptions of South Africa by other nations on the continent, when he would hear comments such as "Hey a beautiful country, but why do you guys hate us?" he felt a need to address those issues, and in particular how Africans relate to each other in China.
Set in China, one of his films tackles xenophobia. It is about an African from an Anglophone background, and another from a Francophone background, who live together in a dormitory. But they can't communicate with each other and xenophobic and cultural intolerances start coming out.
"As a black African male living in such a homogenous society I think your identity is constantly being deconstructed - if you are a black African male you can run fast you can dance well, so there is a lot of exoticism, a lot of ignorance around Africans from a Chinese perspective," he asserts.
He has had to adapt to accomplish things in China.
"The Chinese have a system whereby you need to operate internally. You need to surround yourself with Chinese people whom you can trust who can help you circumnavigate all the red tape," he says. 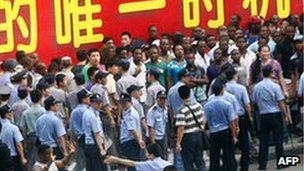 Tension: Africans protested after an African man fell to his death while trying to escape a visa check
He has lived in China for five years and a lot of his closest friends are Chinese.
"Culturally, if you approach business with the Chinese there are a lot of markers you should follow which a lot of foreign businesses don't know," he notes.
"The process of getting a government tender from South Africa, a multi-million rand tender to build a road in South Africa, how they do it in China is 100% different and something that South African businessmen might neglect or overlook.
"The Chinese might look at it in a pretty intense way and a lot of the time there hasn't been that cultural dialogue and it can create an awkward or intense situation where the deal might go sour just because of one little thing," he says.
"The fact that I speak the language helps. If I am sitting in a room with Chinese and South African businessmen, I speak the best English other than the South Africans and the best Chinese other than the Chinese, so I will always be one step ahead," he says.
"But I think I can get a lot by just understanding the cultural nuances from either side," he adds.
Local competition There has been an increase in the number of Africans seeking work in China because the borders to Europe and the US are increasingly closed to these kinds of migrants, according to Heidi Ostbo Haugen at Oslo University's sociology and human geography department.
"They are going to China not knowing very much what the economic or labour market situation is like, hoping perhaps to find jobs at the assembly lines in China which they will not find at home. 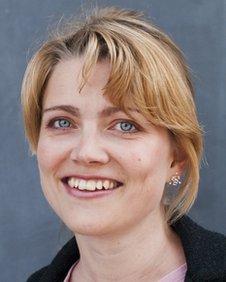 Ms Haugen: Migrants are targeted by corrupt officials and thugs
"In China it is still cheap to employ Chinese internal migrants for the assembly lines and they will not be able to get work permits," she says.
There seems to be more traffic in the other direction, mostly with Chinese people working for Chinese companies.
"They are not going to Africa for jobs as such. The ones that do end up migrating or staying beyond their contract do so because they see business opportunities to make money. So most of them are going into tiny business operations on their own, and that is one of the areas which is causing so much tension in Africa because you have Chinese people opening up small grocery stores, or selling consumer goods to the lowest end of the market," she explains.
Problems seem inevitable when you might have the political party in power wanting to increase ties with China and bending over backwards to make the Chinese feel welcome, pitted against people working at home affairs, immigration or trade departments, who have very different views.
Ms Haugen notes: "Increasingly Chinese migrants, along with migrants from Pakistan, India, and Bangladesh, are being targeted by corrupt officials as well as criminals and thugs who see them as soft targets."
Meanwhile, as money, goods and services flow back and forth at unprecedented levels, a deeper question persists: how well do Chinese and Africans actually know each other?