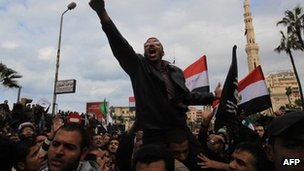 President Morsi's supporters say the new constitution will secure democracy
Backers of President Mohammed Morsi have urged all Egyptians to work together after the adoption of a controversial new constitution.
Muslim Brotherhood leader Mohamed Badie said Egyptians should "begin building our country's rebirth with free will... men, women, Muslims and Christians".
More than 60% of voters backed the constitution in a referendum, although only a third of the electorate voted.
Critics say the document favours Islamists and betrays the revolution.
President Hosni Mubarak was ousted from power in February 2011 after nearly 30 years of authoritarian rule.
After the referendum result was announced on Tuesday, dozens of anti-constitution protesters blocked one of the main bridges in the capital Cairo, setting tyres alight and stopping traffic.

Continue reading the main story
Parliamentary elections must now take place within two months.
The political divisions surrounding the referendum have led to economic uncertainty and a reported rush to buy US dollars.
Currency exchanges in parts of Cairo were said to have run out of dollars. Before the result was announced, the authorities declared a limit of $10,000 (£6,200) for travellers into and out of Egypt.
On Monday, Egypt's central bank issued a statement saying that the banks had "stable liquidity" to safeguard all deposits.
The BBC's Bethany Bell in Cairo says President Morsi's government will soon have to take some unpopular measures to prop up the economy, which could hurt his party at the ballot box.
'Special responsibility' On Tuesday, Mr Badie welcomed the referendum's results, tweeting: "Congratulations to the Egyptian people on approving the constitution of revolutionary Egypt".
Echoing his words, Prime Minister Hisham Qandil stressed that there was "no loser" in the vote and called for co-operation with the government to restore the economy.

Constitution at a glance

President Morsi's mainly Islamist supporters say that the new constitution will secure democracy and encourage stability.
But opponents accuse the president, who belongs to the Brotherhood, of pushing through a text that favours Islamists and does not sufficiently protect the rights of women or Christians, who make up about 10% of the population.
The US state department responded to the vote by urging all sides in Egypt to commit themselves "to engage in an inclusive process to negotiate their differences".
In a direct appeal to President Mohammed Morsi, spokesman Patrick Ventrell said that as democratically elected leader he had a "special responsibility... to bridge divisions, build trust and broaden support for the political process".
Turnout was 32.9% of Egypt's total of 52 million voters, election commission President Samir Abul Maati told a news conference in Cairo.
Mr Maati rejected opposition allegations that fake judges supervised some of the polling - one of several complaints relating to voting fraud made by the opposition National Salvation Front after each stage of voting.
Egypt has recently seen large demonstrations by both critics and supporters of the constitution, which have occasionally turned violent.
Before the first round of voting on 15 December, the opposition considered boycotting the referendum before deciding to back a No vote.
Polling had to be held on two days because of a lack of judges prepared to supervise the process.