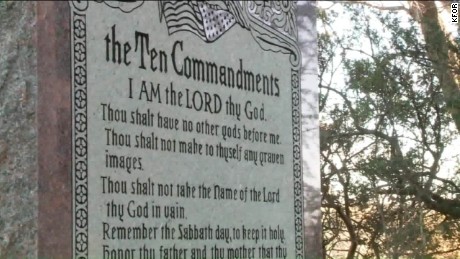 Oklahoma Supreme Court orders removal of Ten Commandments 01:32
(CNN)After the Supreme Court's week of high-profile decisions, Oklahoma's high court made a stir of its own in a ruling that had a group of self-proclaimed Satanists and an ordained Baptist minister celebrating.
The Oklahoma Supreme Court ruled Tuesday that the state must remove a 6-foot tall granite monument of the Ten Commandments from its capitol because it violates the state's constitutional ban against the use of public funds or property to benefit a religion.
The decision came after years of controversy and legal battles. The monument's supporters include prominent figures in the state, including Oklahoma Gov. Mary Fallin and members of the state's legislature.
In an interview with CNN affiliate KOCO, Bruce Prescott, an ordained Baptist minister and one of the plaintiffs in the suit against the display, said, "I'm not opposed to Ten Commandments monuments. I'm just opposed to the placement on government property, because I think that the government needs to be neutral."
Karen Monahan, a resident of Oklahoma, expressed strong opposition to the decision and told CNN affiliate KOKH-TV, "I'm not going to accept this as the final word."
Some state legislators blasted the ruling and announced they plan to try to repeal the section of the state's constitution the court cited in its decision. Oklahoma's amendment process means a statewide vote may ultimately decide the matter.
Until that happens, the Ten Commandments monument will not be the only religious statue no longer allowed on the site. A monument of Baphomet, a goat-headed satanic figure, was once destined for the state capitol, but now its owners will have to find a new place for it.
A group called the Satanic Temple has worked for years to put a Baphomet statue in the capitol as a way to "complement and contrast" with the Ten Commandments statue. After an Indiegogo campaign raised over $28,000 last year, Satanic Temple moved in earnest to build the statue and applied to have it displayed there.
The Baphomet monument is set to be unveiled later this month, and the Satanic Temple said a new home will be found for it. Even though the Satanists have to move on from Oklahoma, the Satanic Temple claimed the ruling as a win.
"The entire point of our effort was to offer a monument that would complement and contrast the Ten Commandments, reaffirming that we live in a nation that respects plurality, a nation that refuses to allow a single viewpoint to co-opt the power and authority of government institutions," Satanic Temple spokesman Doug Mesner told the Washington Post in an email.
Mesner, who also goes by Lucien Greaves, offered the Post another possible location for the Baphomet statue: "Arkansas is looking rather appealing." The government of Arkansas moved earlier this year to approve the placement of a Ten Commandments monument in its capitol.
http://edition.cnn.com/2015/07/02/politics/oklahoma-supreme-court-orders-removal/
Posted by Terrobuster at 9:04 PM