More than four million Syrians - a sixth of the population - have fled abroad to escape the conflict in their country, the United Nations has said.
A surge in the number of people crossing into Turkey has increased the total by one million in just 10 months.
More than seven million others have been displaced inside Syria since the start of the uprising in March 2011.
The head of the UN's refugee agency, Antonio Guterres, called it the "worst humanitarian crisis of our generation".
The refugee crisis is the largest resulting from a single conflict in nearly a quarter of a century.
More than 230,000 people have also been killed in the past four years, activists say.

The UN High Commissioner for Refugees (UNHCR) said Turkey is home to the largest number of Syrians refugees - 1.8 million - and is reportedly preparing for a new influx as the conflict escalates near the border between the countries. 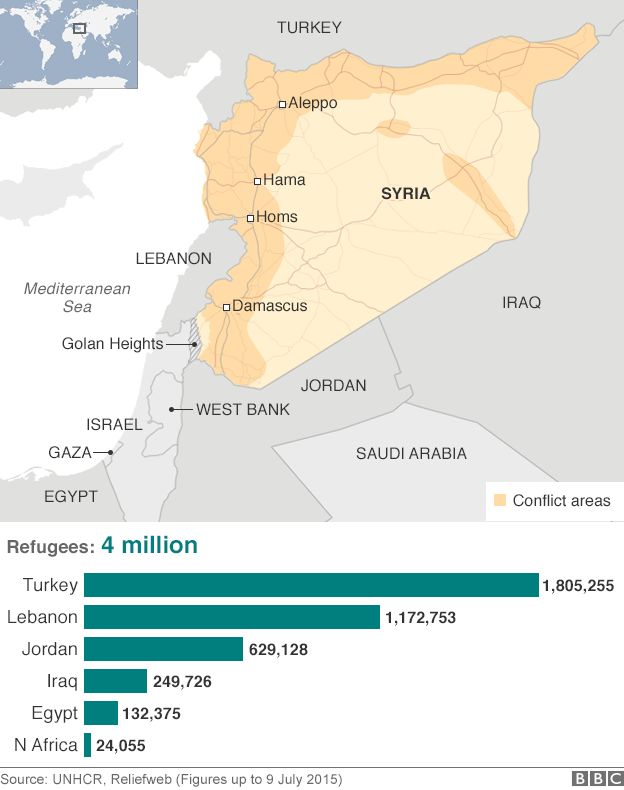 Another 1.2 million people have fled to Lebanon and 629,000 to Jordan.
Many have also attempted the perilous boat crossing to Europe. Syrians made up about a third of the 137,000 migrants who crossed the Mediterranean in the first half of 2015.
In all, about 270,000 Syrians have sought asylum in Europe.
Mr Guterres told the BBC that Europe would need to help more as the crisis worsened.
"We despair not knowing what to do with the more and more civilians risking their lives, moving onwards," he said.
"This is a human drama. This is a terrible situation for the region but this is becoming also something that we'll ask Europe to fully assume its responsibilities."
The UNHCR said that if Syrians continued to flee at the same pace it expected the number of refugees in neighbouring countries to reach 4.27 million by the end of 2015.
The agency has received less than a quarter of the $5.5bn (£3.6bn) it says it needs this year to help Syrian refugees and the countries hosting them.
http://www.bbc.com/news/world-middle-east-33457886?ocid=socialflow_facebook

Posted by Terrobuster at 1:02 AM