An Oregon woman who killed one woman and injured at least 35 pedestrians when she plowed her car into crowds on a Las Vegas Strip sidewalk on Sunday evening was driving with her license suspended, authorities said on Monday.Lakeisha N. Holloway, 24, who was homeless and living in her sedan with her toddler, gave herself up to officers a short distance from the scene of the carnage. She parked her car and told a valet to call 911, Las Vegas Metropolitan Police Sheriff Joe Lombardo told a news conference.
Surveillance video from the scene supports the police assertion that Holloway drove into pedestrians as "an intentional act," Lombardo said.
He told reporters Holloway made a statement to police explaining her motive. He declined to relate what she said, other than that the incident did not appear to be a militant attack.
According to an arrest report posted online, Holloway told detectives she had a stressful time on Sunday, trying to rest and sleep inside her vehicle, but that she was told to move by security guards at the properties where she stopped.
"Her license was suspended by the Oregon DMV in 2012 and was also suspended by (Portland's) Multnomah County in 2013 and has not been reinstated," said Oregon Department of Transportation spokeswoman Sally Ridenour.
U.S. law enforcement has been on heightened alert since 14 people died in a Dec. 2 shooting massacre in San Bernardino, California, by a married couple inspired by Islamic extremists.
Sunday's incident occurred during the Miss Universe beauty pageant at a nearby hotel.
Holloway repeatedly drove her 1996 Oldsmobile into pedestrians on the crowded walkway, banging into newspaper stands and poles, Lombardo said.

Bystanders pounded on the car window and tried to open the door in a futile attempt to stop her, he said.
Justin Cochrane, a tourist having dinner on The Strip, told CNN the sedan, its windshield cracked, barreled past him. He said the driver then swerved to avoid a truck before accelerating back onto the sidewalk.
"It was mayhem, and it was very intentional," Cochrane told CNN. "People were flying. This child I saw, literally, hit. And the sound, I'll never forget."
Jessica Valenzuela, 32, of Buckeye, Arizona, died from injuries after she was struck, the Clark County Coroner-Medical Examiner's office said.
Other victims included visitors from Colorado, Florida, Mexico and Quebec, Canada.
Clark County District Attorney Steven Wolfson said his office planned to bring charges of murder with use of a deadly weapon and other counts against Holloway, who was held without bail.
POOR DRIVING RECORD
Holloway, who is from Oregon and whose car was registered in Portland, had been living in the car in Las Vegas for about a week with her 3-year-old daughter, Lombardo said. The child was in the car when Holloway drove into the pedestrians.
University Medical Center was treating three patients listed as critical and two in serious condition, spokeswoman Danita Cohen said. An 11-year-old was among the injured, she said.
Holloway's child, who was unhurt in the incident, is in protective custody, Lombardo said.
In the spring of 2012, Holloway received an award from a Portland career-mentoring nonprofit for being a role model for high school students, according to The Skanner, a community website in the Pacific Northwest.
The story recounts Holloway describing her mother as having "turned to alcohol, leaving Lakeisha to fend for herself." Holloway was homeless during her freshman year in high school, according to The Skanner, but had since graduated.
On her Facebook page, Holloway indicated she had studied at Portland Community College.
The Oregon DOT's Ridenour noted that generally drivers cannot obtain a license in another state if their license has been suspended. That is because licensing departments across the country share information, as do law enforcement agencies.
In Oregon, where a driver can have multiple suspensions at one time, Holloway was cited and convicted in 2011 for driving uninsured and operating a vehicle without a license.
Then, in 2012, three months after being issued her first driver's license, her license was suspended for failing to comply with insurance requirements. It was suspended again in 2013 for failing to pay court fines related to previous citations.
(Additional reporting by Alicia Avila, David Becker and Rollo Ross in Las Vegas, Curtis Skinner in San Francisco, Alex Dobuzinskis in Los Angeles, Ian Simpson in Washington, and Eric M. Johnson in Seattle; Writing by Alex Dobuzinskis and Eric M. Johnson; Editing by Dan Grebler and Richard Borsuk) 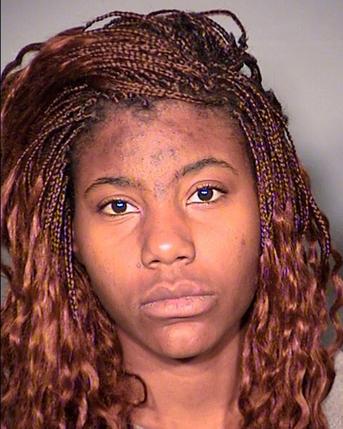 Lakeisha Holloway, a suspect who drove into pedestrians on the Las Vegas Strip, killing one person, is shown in this Las Vegas Metropolitan Police Department booking photo released on December 21, 2015. Holloway is expected to face murder and other charges in connection with...
Reuters/Las Vegas Metropolitan Police Department/Handout FOR EDITORIAL USE ONLY. NOT FOR SALE FOR MARKETING OR ADVERTISING CAMPAIGNS. THIS IMAGE HAS BEEN SUPPLIED BY A THIRD PARTY. IT IS DISTRIBUTED, EXACTLY AS RECEIVED BY REUTERS, AS A SERVICE TO CLIENTS