'My friends were afraid of me': What 80 million unexploded US bombs did to Laos

Xieng Khoung, Laos (CNN)For two years after the accident, Yei Yang refused to leave his home.
"I couldn't farm, I couldn't go to see friends, as they might be afraid of me," Yang tells CNN.
"I didn't want to live."
Yang was just 22 and burning rubbish near his village in the province of Xieng Khoung in north-eastern Laos, when a bomb blast tore off one of his eyelids, his top lip and an ear, mutilated one of his arms, and left him with severe scarring from the waist up.
"I remembered I burned the garbage, but after the explosion I was unconscious for two weeks," Yang says. "I felt extreme pain...all over my body. I still feel pain always."
His wounds were not caused by a modern day conflict, but by the remnants of a war that was waged more than 40 years ago, and is still destroying lives in this small Southeast Asian nation.
Some 80 million unexploded bombs are scattered across the country -- the deadly legacy of what became known as America's "secret war" in Laos -- a CIA-led mission during the Vietnam War.

The operation was aimed at blocking Vietnam's supply lines on the Ho Chi Minh Trail in the south of Laos, and also to support the Laos government loyalists in a civil war against communist forces in the north.
In total, between 1964 and 1973, the US dropped more than two million tons of bombs -- one of the heaviest aerial bombardments in history.
Most of the munitions dropped were cluster bombs, which splinter before impact, spreading hundreds of smaller bomblets -- known locally as "bombies."
To this day, less than 1% of the bombs have been removed, according to US-based NGO Legacies of War, which is spearheading the campaign to clear them.
"We were all but forgotten here," says the Laos-born founder of Legacies of War, Channapha Khamvongsa. 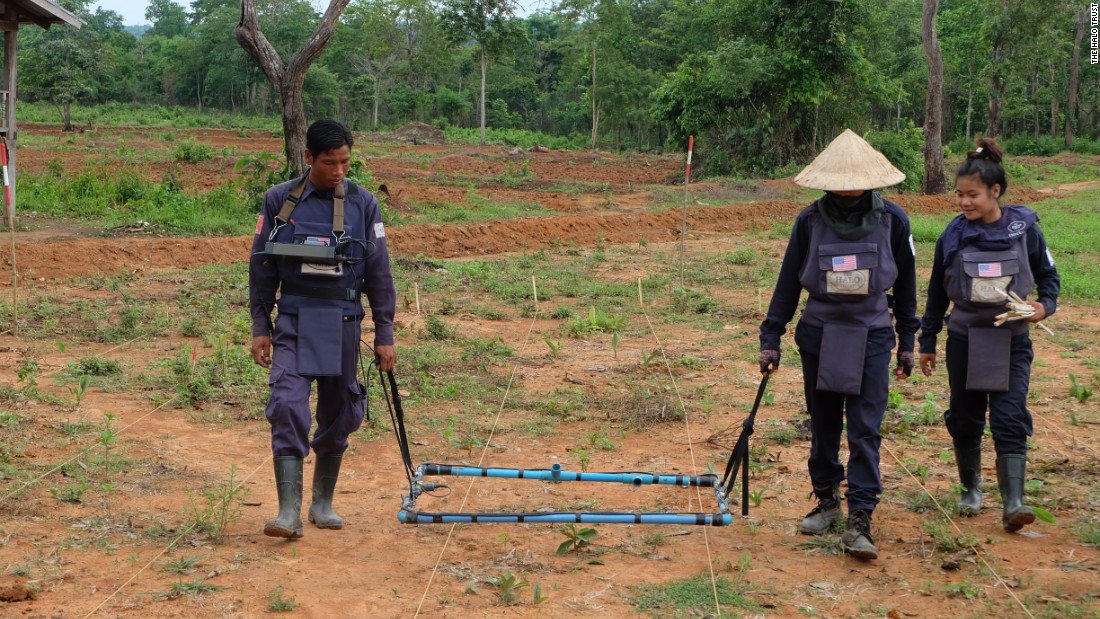 Photos: Clearing unexploded bombs in Laos
The HALO Trust is the world's largest humanitarian mine clearance organization. It works in Laos to clear unexploded ordnance. Here, two HALO technicians use a Large Loop Detector to clear a hazardous area. 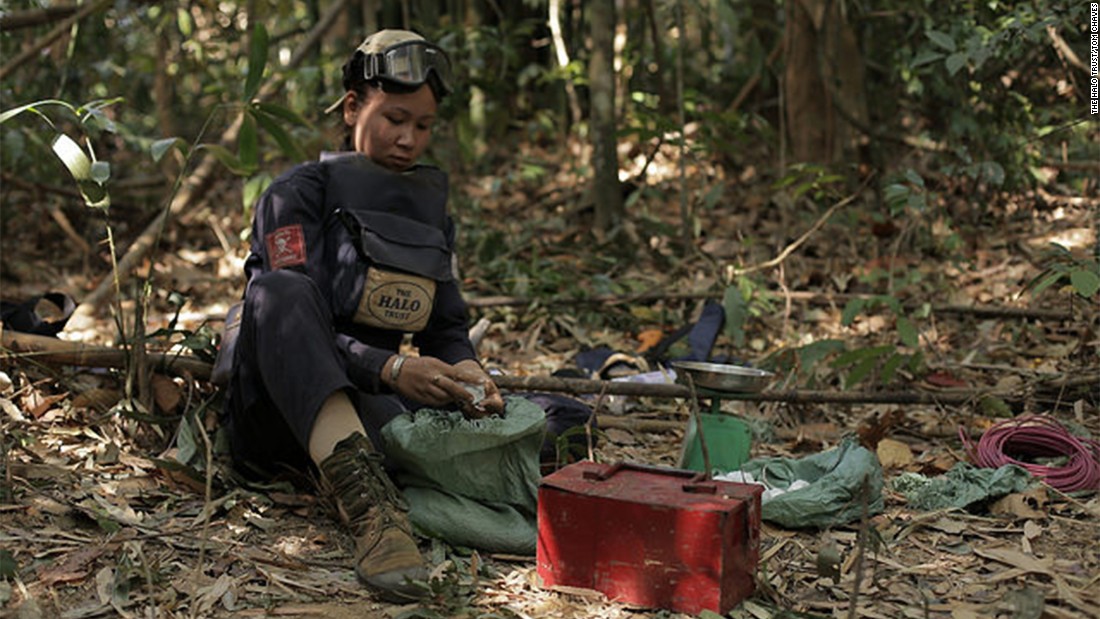 Photos: Clearing unexploded bombs in Laos
Ms Toyota, one of HALO's team leaders, prepares what she needs to conduct the demolition of a cluster munitions

More than 20,000 people have been killed or maimed by the unexploded ordnance (UXOs) since the war ended, and currently, 50 people are maimed or killed every year.
Around 40% of those are children.
"(The bombies) are tennis ball sized weapons," Khamvongsa says. "The children often mistake the bombs for toys, and pick them up and throw them around. This is often the cause of an explosion."
Farmers are also among the worst affected, as the poorest are forced to toil the mine-laden fields to feed their families.
"Eighty percent of people rely on their land to grow food in Laos," Khamvongsa says. "So they still use their land even at the risk of their own lives."
President Barack Obama, who arrived in Vientiane late Monday, addressed the US wartime legacy during his three-day visit to Laos, by announcing $90 million in funding for bomb clearance.
As the first US president to step foot inside the country, everything he says will be closely watched by the people of Laos.
"People are just anxious to hear what an American president has to say about it and to acknowledge what the US did here," Khamvongsa says. "This will bring greater visibility to what has happened."
Obama: $90 million to clear unexploded bombs

Land that can't be farmed

It's not just the loss of life that has scarred the country.
With a quarter of villages in Laos contaminated with UXOs, it makes vast swathes of the Laos countryside unfarmable.
This contributes to widespread malnutrition and poverty, holding back economic development in a country that is already one of the poorest in Southeast Asia.
It's the young people of Laos -- 70% of the population is under 30 -- that bear the brunt of this deprivation.
Laos has the highest level of stunted growth linked to malnutrition in the region, with 40% of children affected, says Bernie Chaves, the Laos Country Representative for Catholic Relief Services (CRS), which runs a US-funded school meals program.
"You often see 14-year olds who look more like 10-year olds," he says.
It's an issue that U.S. Secretary of State John Kerry highlighted when he visited Laos in January.
"We are going to address directly this challenge of hunger," Kerry said.
U.S. aid to Laos has been rising steadily for years, and in 2016, Congress allocated $19.5 million for the removal of the bombs -- the highest level it has ever been. 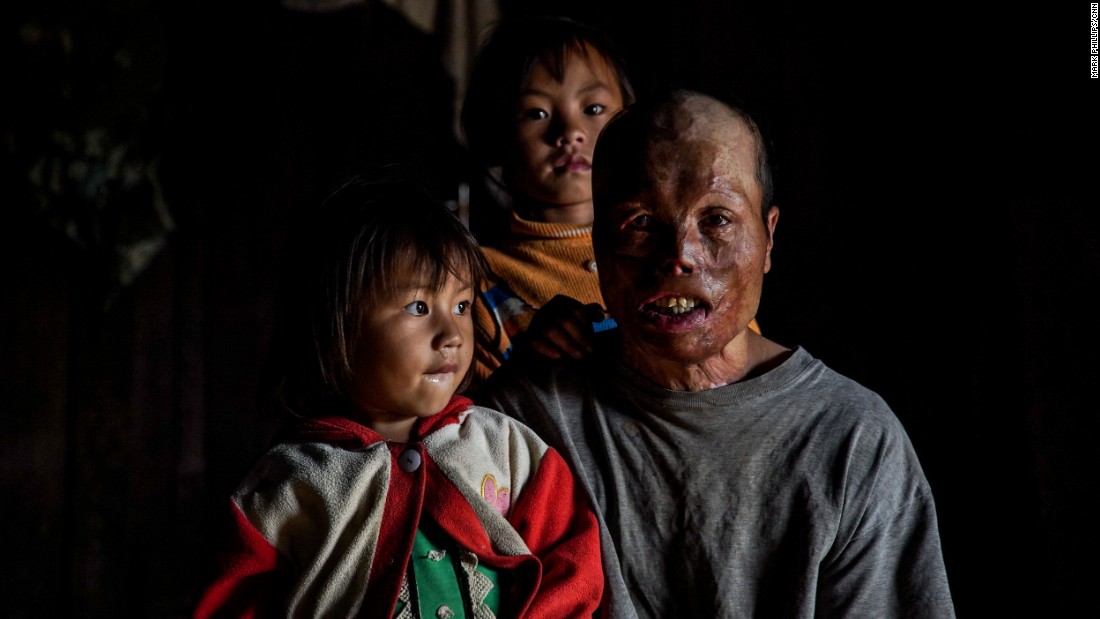 Yei Yang with two of his three children.

I don't want my children to be victims

Khamvongsa says the problem will not be solved with short-term projects. What's needed, she says, "is a larger increase in funding, as well as a long-term sustained US commitment."
The hope is that the funds won't dry up after Obama leaves office.
"I personally believe that the U.S. has a moral responsibility to do this," Chaves says. "And increase in funding should be a priority of the next government coming in."
This sustained commitment is crucial to the country's future generations -- a huge concern for Yang, now aged 30 and a father of three young children.
He was engaged to be married and had a job as a laborer when the accident happened. Now, he's only able to do occasional work. His family depends on his wife's income and the support of a non-profit group World Education.
"I am worried that my children could become victims," he says. "(And) about how I will be able to raise my children."
Read more: http://edition.cnn.com/2016/09/05/asia/united-states-laos-secret-war/index.html
Posted by Terrobuster at 1:43 AM