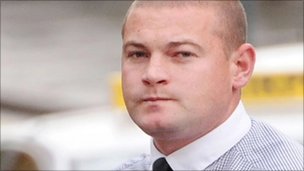 Ryan Leslie was found guilty of murder and causing grievous bodily harm
County Antrim man Ryan Leslie has been told he must serve 17 years in prison for the murder of his baby son Cameron.
In February, Leslie, 26, of Ballyvesey Green, Newtownabbey, was found guilty of murdering his 14-week old son and causing him grievous bodily harm.
Cameron Jay Leslie died in hospital in September 2008 after suffering severe injuries to several parts of his body.
On Wednesday, a High Court judge set a minimum tariff for the mandatory life term given to Leslie in February.
Mr Justice Stephens said that Leslie had shown no insight or remorse for his actions and had shown himself to be a violent individual unable to control his temper.
'Preposterous lies' He also considered that the lies Leslie told the police in his attempts to avoid detection were "preposterous and farcical" and described him as a "dishonest and deeply manipulative individual".
During the trial, the court heard evidence that Cameron's death was due to his brain swelling up so much that it cut off the oxygen supply to his brain stem.

Continue reading the main story
This injury had been caused by a severe blow to the back of his head inflicted by his father.
Deputy State Pathologist for Northern Ireland, Dr Peter Ingram told the jury that he had uncovered numerous bruises to both of Cameron's arms, his legs, torso, throat and chin.
The doctor also uncovered a total of 14 rib fractures, all of which were "typical of injuries seen in cases of child abuse".
These had been inflicted by Leslie days before the fatal assault and did not contribute to Cameron's death.
The baby had been staying with his father for two days before being rushed to hospital on 4 September 2008. He died two days later.
Leslie had split with Cameron's mother, Sheree Black, in August, but she allowed him to have overnight visits with his son at his flat. 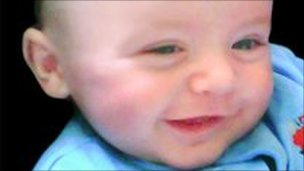 14-week-old Cameron died in 2008
The judge said his relationship with Ms Black was marked by physical and verbal violence.
"You stated in evidence that you had physically assaulted her on seven occasions including kicking her on the upper leg when she was pregnant, throwing a TV remote control at her striking her on her face causing her a bruise and pulling and dragging her by the hair.
"You have problems controlling your temper and had sought assistance from your general practitioner and a psychiatrist.
"It was suggested that you attend, but you did not, an anger management course," he said.
The judge said Leslie's current partner was five to six weeks pregnant.
He said Leslie still posed a risk to the public and a risk of reoffending and described him as "a dishonest and deeply manipulative individual".
After the sentencing, Cameron's mother Sheree Black, said: "Life should be life at the end of the day... Ryan shouldn't ever be allowed out for what he's done."
"But I am satisfied with what the judge said and he did sum him up to exactly what he is. He's a beast."

More on This Story

Posted by Terrobuster at 8:39 PM