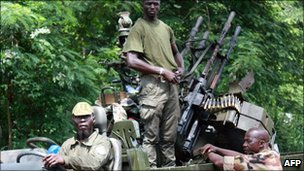 
Forces loyal to one of Ivory Coast's rival presidents, Alassane Ouattara, have captured the administrative capital Yamoussoukro, residents say.
Fighting erupted when they later entered the key port of San Pedro on their advance from the north against incumbent leader Laurent Gbagbo.
Mr Gbagbo continues to cling to power in the main city Abidjan.
The UN, which recognises Mr Ouattara as winner of November's poll, has voted to impose sanctions on Mr Gbagbo's circle.
They add to economic measures already taken by the EU and African groups.
The UN resolution, drafted by France and Nigeria, imposes a travel ban and assets freeze on Mr Gbagbo, his wife Simone and three of his closest associates.
One million people have fled the violence - mostly from the main city Abidjan - and at least 462 people have been killed since December, according to the UN.
'Intense shooting' Abidjan remains largely under the control of Mr Gbagbo but Yamoussoukro's capture is a major symbolic victory for the pro-Ouattara forces, the BBC's John James reports from the central city of Bouake.

John James BBC News, Bouake
Yamoussoukro is the capital in name only - with all state institutions still in the former capital Abidjan.
But it is still a highly symbolic victory; this is the hometown of Ivory Coast's first President, Felix Houphouet-Boigny. It is also home to some significant pro-Gbagbo forces, who seem to have put up little resistance to the arrival of pro-Ouattara troops.
The way is now open for forces to Abidjan, less than three hours away along the country's only major highway. Along the way south, the pro-Ouattara forces that took Yamoussoukro should be joined by colleagues coming through from the west, while the eastern flank may also reach northern Abidjan around the same time.
If President Gbagbo decides to stay on and fight, the battle for Abidjan is likely to be fierce. But before the main body of pro-Ouattara forces arrive, the city is already increasingly insecure and Mr Gbagbo's hold on power already looks shaky.

Continue reading the main story
A Yamoussoukro resident told the BBC's Newshour programme: "People are in the streets waiting for them, clapping for them. There are no soldiers for Laurent Gbagbo in the town now."
Late on Wednesday local time, reports came in of heavy gunfire in San Pedro as pro-Ouattara forces entered the world's biggest cocoa-exporting port.
"There was an exchange of fire in the northern entry a little after 2200 [2200 GMT]," one resident told AFP news agency.
"Intense shooting quickly spread throughout the centre," another added.
San Pedro is a key objective for Mr Ouattara because it would allow him to export cocoa and lumber, and would allow his supporters to resupply by sea.
In Abidjan, 240km (150 miles) south of Yamoussoukro, the UN says attacks on civilians by pro-Gbagbo youths have continued.
The enrolment of these youths into the army was due to start on Wednesday to replace soldiers who are not turning up for work or who have changed sides, our correspondent says.

Continue reading the main story
Fighters loyal to Mr Ouattara have been gaining ground on three fronts from their northern bases this week.
In the west, pro-Ouattara forces have taken the key towns Daloa and Duekoue, while in the east, the forces say they have captured Bondoukou.
An estimated 40,000 people have taken refuge in a church compound in Duekoue to escape the fighting.
A spokesman for Mr Gbagbo said the army had adopted a strategy of tactical withdrawal but warned it could use its "legitimate right of defence".
Mr Gbagbo's government offered a ceasefire on Tuesday but Mr Ouattara's fighters dismissed the appeal as a diversion.
The pro-Ouattara forces have controlled the north of the country since a 2002 civil war.
Pro-Gbagbo troops have lost every battle against them since last November's election, our reporter says.

Posted by Terrobuster at 8:25 PM