Shelly Frey, 27, was shot and killed by an off-duty sheriff’s deputy at a Houston, TX., Walmart. The deputy was suspicious of Frey, saying he thought she was stealing from the store, reports UK Daily Mail.
Harris County Sheriff’s deputies said that Shelly Frey, Tisa Andrews and Yolanda Craig were shoplifting when they were stopped by Louis Campbell, a 26-year veteran of the force, who is employed as a security guard at Walmart.
Campbell said that the women dashed to their car, and when he went to open their car door, they drove away. Campbell then thought it was his duty to stop the perpetrators so he fired the deadly shot into the car which hit Frey in the neck.
Security at the store noticed the three women putting items into their purses and notified Campbell, who was working an extra job that night.
The three shoplifters tried to pay for some small items to serve as a cover for the ones they planned to steal.
Campbell opened Frey’s car door and told her to get out, after he chased her and the other two women to the car, but she refused, said officials.
Andrews started to drive away while the deputy was standing between the open door and the driver’s seat.
“She threw it in reverse and tried to run over the deputy,” said Harris County Sheriff’s Office spokesperson Deputy Thomas Gilliland.
Gilliland said, “He confronted the suspects at exit of the store before they left. One female wouldn’t stop, struck the deputy with her purse, ran off.” He added, “I think it knocked him off balance and, in fear of his life and being ran over, he discharged his weapon at that point.”
Officials said that there were two small children in the vehicle at the time of the incident, although they were not Frey’s, who is a mother of two.
“He was clearly marked in uniform as a Harris County deputy. And identified himself as the suspects were leaving the establishment,” said Gilliland regarding Campbell.
Even with Frey wounded, the women still fled, but they stopped at The Worthington at the Beltway apartments in the 1300 block of Greens Parkway. Frey was pronounced dead at the scene when paramedics arrived.
“Shelly was the perfect mom, perfect friend, perfect daughter,” said her father, Shelton Frey.
“Why couldn’t you just shoot the tire, shoot the window?” said her mother Sharon Wilkerson. “Was it that serious?”
Sharon said that even if Frey did shoplift, she didn’t deserve to die. She is now concerned for Frey’s children.
Andrews and Craig have both been charged with shoplifting. A small price to pay when their friend was shot to death.
As for deputy Campbell, he is on three days paid leave for standard protocol. The Harris County Sheriff’s Homicide Unit, Office of the Inspector General and the Harris County District Attorney’s Office will investigate this horrific incident. The case will go in front of a grand jury.
Walmart said in a statement:
- See more at: http://www.interpacket.com/woman-shot-dead-for-shoplifting-at-walmart/#sthash.qgRHLfbD.dpuf 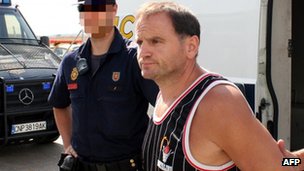 Veselin Vlahovic was extradited by Spain in 2010
A court in Bosnia-Hercegovina has sentenced a former Serb paramilitary commander to 45 years in prison for war crimes during the 1992-95 conflict.
Veselin Vlahovic was found guilty on more than 60 counts, including the murder, rape and torture of Bosnian Muslim and Croat civilians in Sarajevo.
The Montenegrin - known as the "Monster of Grbavica", after a district of the city - had pleaded not guilty.
His sentence is the longest handed down so far by the Bosnian war crimes court.
The verdict took around two hours to read because of the large number of crimes involved.
'Synonym for evil' In his closing statement, prosecutor Behaija Krnjic said Vlahovic's name was "the synonym for evil", and that he had killed 31 people, kidnapped 14 others still considered missing, and raped 13 women.
The crimes took place in three districts of Sarajevo controlled by Serb forces between May and July 1992 - Grbavica, Kovacici and Vraca.
BBC Balkans correspondent Guy De Launey says it is not the first time Vlahovic has been convicted.
He was sentenced to prison for robbery in his native Montenegro, but escaped 12 years ago.
He then lived in Spain under a Bulgarian passport until his arrest and extradition in 2010. Vlahovic was also wanted for armed robbery in Spain, and murder in Serbia.
Our correspondent says the relative speed of the trial is in contrast to proceedings at the International Criminal Tribunal for the former Yugoslavia at The Hague. Former Serb nationalist leader Vojislav Seselj has been in custody there for 10 years and his trial is still incomplete.

Posted by Terrobuster at 5:30 AM