Inside San Pedro Sula, the 'murder capital' of the world 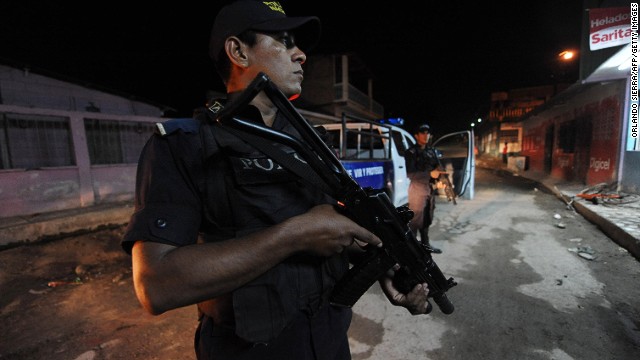 Living in the world's murder capital

STORY HIGHLIGHTS
(CNN) -- It is nighttime as a pack of masked soldiers silently moves toward the front line of a deadly shootout between law enforcement officials and unknown men in a dimly lit Honduras neighborhood.

But the soldiers are too late to prevent the grisly scene that awaits them. One of their own is on the ground, seriously wounded. One of the attackers is dead, and three others have been shot.
"They didn't even say a word. They just pulled out their weapons and started shooting at our soldiers," army commander Carlos Rolando Discua said of the scene, which has become all too familiar in Honduras' second-largest city.
Discua oversees a unit of soldiers, often masked to protect their identities, who patrol the streets of San Pedro Sula, the so-called murder capital of the world.
Photos: Deadly violence grips Honduras
For the second straight year, San Pedro Sula, in northwest Honduras, has topped a list of the world's 50 most violent cities, with a rate of 169 intentional homicides per 100,000 inhabitants -- an average of more than three people every day.
The report, compiled by the Mexican think tank Citizen Council for Public Security, Justice and Peace, compared intentional homicide statistics around the world in 2012. The report does not include cities in the Middle East.
The sunny beach resort of Acapulco in Mexico ranked second on the group's list, followed by the Venezuelan capital of Caracas.
New Orleans is the murder capital of the United States, according to the report, which ranked the city 17th on the list. Detroit, St. Louis, Baltimore and Oakland were the other U.S. cities to make the list.
Central America's bloody drug problem
San Pedro Sula's challenge, experts say, is that Mexico's offensive against drug cartels and the active U.S. deportation of criminal immigrants are pushing the problem south. Some of this criminal element has ended up in Honduras, where, like most Central American countries, law enforcement has few resources to fight it.
But city residents say that "murder capital of the world" is an undeserved label that is hurting local businesses.
There are only three morgues in Honduras, and one of them is in San Pedro Sula. Residents say that people who are murdered elsewhere and then taken to the city's morgue are being grouped into the city's crime statistics.
"All of the crimes that happen in northern Honduras are registered as happening here," businessman Luis Larach said. "So what we businessmen are doing is an accurate count to determine where crime or violent deaths originate so that the information is truthful."
The National Autonomous University of Honduras said that only people murdered in San Pedro Sula were tallied in the group's report -- and that in fact the actual murder rate in the city is even higher.
The authors of the report defended their research on the group's website, writing: It "is not the ranking that damages the image of the city but the violence and the government's inability to contain and reduce it. To hide the problems never solves them."
Honduras is far from the only country in the region with a murder problem. The top 10 -- and 39 of 50 overall -- most violent cities on the list are Latin American.
Authorities have launched Operation Lightning in San Pedro Sula, saturating violence hotspots with police and soldiers, and some residents believe the beefed-up security is working.
"There's more security now," said local resident Nicolle Valladares. "And that gives us peace."
Unfortunately, at least so far, the measures seem to have had little impact on the murder rate.
Journalist Elvin Sandoval in San Pedro Sula, Honduras, and CNN's Laura Perez Maestro in London contributed to this report.
Posted by Terrobuster at 5:12 AM