Reuters / Bruno Domingos
Tags
Africa, Children, Crime, Sex, UN
A new sexual abuse scandal has engulfed the UN peacekeeping contingent in the Central African Republic after the UN announced that it has opened an investigation and notified troops from contributing countries of the child abuse cases in Bangui.
“If the allegations are substantiated, this would constitute a grave violation of UN principles and of the code of conduct of peacekeepers,” spokesperson of the Secretary General, Stephane Dujarric said in New York. “The member-state will be requested to take swift and appropriate punitive action.”

UN panel suggest banning nations from missions over sexual offenders
According to the UN, countries that have troops in the Central African Republic (CAR) were notified on Monday and now have ten days to report back to UN on their action plans in response to the allegation.
The latest case of sexual abuse by peacekeepers in Bangui was recorded by the UN CAR mission (MINUSCA) last Friday, and involves underage girls. Dujarric did not specify how many girls were involved or the country of origin of the perpetrators.
But a UN official told AFP that the recent scandal involves at least two girls, that claimed to have received goods and food in exchange for sex from an African peacekeeping contingent.
“Medical care and assistance is now being provided to the alleged victims,” Dujarric said. “What we know is that the crimes could go back as far as 2014 and then most recently occurred this year.” 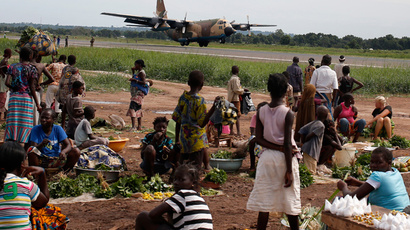 The new allegations are the third in a series of UN sexual scandals that surfaced in recent months from CAR. Previous cases involved allegations of the sexual abuse of minors that happened in CAR from December 2013 to June 2014, just before an actual MINUSCA force took over from the African Union mission there.
The integrity of the global UN peacekeeping contingent of some 125,000 people deployed across 16 missions in the world was also tainted by sexual misconduct accusations in Haiti. Just this month, a UN report revealed routine sexual abuse in exchange for food, jewelry and basic electronics.
To address the issue of the UN contingent’s sexual misconduct, which is strictly prohibited by the organization, Secretary-General Ban Ki-moon on Monday appointed a three-member panel, headed by former Supreme Court justice of Canada Marie Deschamps, to handle the child sexual abuse allegations in the Central African Republic. Their final report is due within ten weeks.