BBC Trending What's popular and why
It's part of a journalist's job to keep track of awful events. But stories about rickety boats crammed with migrants capsizing in the Mediterranean occur with horrible frequency. For one Somali journalist reading the news that hundreds of people drowned in one such disaster on Monday, it was one story too many.
Abdinur Mohamed Ahmed decided to do something. He decided to create a campaign to persuade his fellow Somalis not to give their money to people traffickers and instead to stay and help rebuild their war torn country.
So Abdinur, who is based in the Somali capital Mogadishu, started tweeting using the hashtag #DhimashoHaGadan, which literally translated means "don't buy death."
Abdinur told BBC Trending "The whole notion of this hashtag was to discourage people from emigrating to Europe through these perilous journeys."
The hashtag rapidly became popular in Somalia. Some used it to highlight reasons why young Somali people might want to leave.

According to the United Nations around 15% of Somali citizens were living abroad last year. There are many reasons why people would want to go. A horrific drought means that an estimated 40% of the population are thought to be in need of humanitarian assistance.
The UN-backed Somali government remains fragile despite the support of African Union troops. Al-Shabab, an Al-Qaeda affiliate, has been waging an armed insurgency in Somalia for years. It frequently stages attacks in Mogadishu and other cities, and still controls many rural areas in southern Somalia.
Despite the security situation Abdinur has never considered leaving.
"In the last 12 months I have survived two suicide attacks and I have never decided to leave for security reasons. Death is everywhere, suicide attacks happen in Paris, everywhere… There's no reason to leave this country because of insecurity," he told Trending. 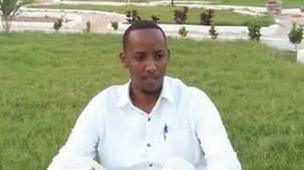 Abdinur is worried about the impact large scale emigration could have on the future of Somalia: "If we leave this country because of insecurity or unemployment, who will change this country? Who will make this country a peaceful place to live?"
He also told Trending that he believes reality of life in Europe does not match expectations. One of his relatives left for Europe last year and calls him to tell him how unhappy he is.
I got in touch with Abdinur's relative on Whatsapp and he told me, "Life in Europe is not as easy as you might think right now. Language barriers, low paid jobs and lack of documents are the main hurdles to integration. We feel we've entered an open air prison. I am a professional nurse and I could have done so much for my country and my people. But Sweden does not need my skills. I need to start from scratch."
Abdinur also told BBC Trending he feels there's a false impression created on social media about how good life is in Europe.
"He posted several pictures which can persuade friends to go there too," he told BBC Trending. "I told him to take him down, he understands how dangerous it is."
Blog by Emma Wilson
Posted by Terrobuster at 12:52 AM