US ex-Senator Wofford, 90, to remarry to a man 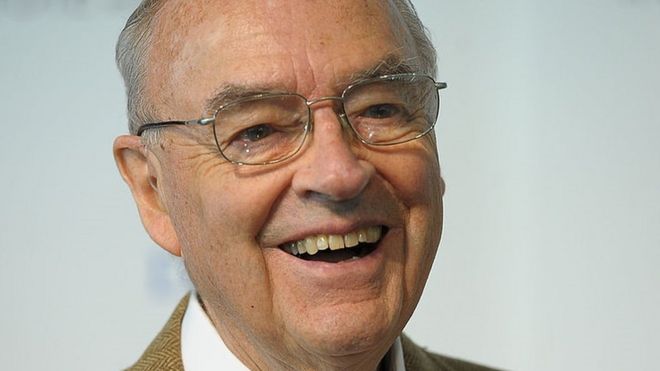 A former US senator will get remarried this week - to someone of a different sex from his first spouse.
Harris Wofford, 90, wrote an opinion article in the New York Times voicing strong support for same-sex marriage.
He said he felt lucky to live at a time when marriage had been "strengthened" in this way.
Mr Wofford said his life was "a story of two great loves" - with his wife Clare, who died of leukaemia in 1996, and with Matthew Charlton, 40.
He wrote: " I don't categorise myself based on the gender of those I love. I had a half-century of marriage with a wonderful woman, and now am lucky for a second time to have found happiness."
In June 2015, the US Supreme Court struck down same-sex marriage bans in individual states, making gay and lesbian marriages legal across the country.
Clare was a strong influence through Mr Wofford's political career. The couple had three children together.
Mr Wofford, a Democrat, represented Pennsylvania in the US Senate between 1991 and 1995.
He started his political life at the age of 18 by founding the Student Federalists, an organisation that promoted world federal government.
He went on to become instrumental in the civil rights movement and joined the presidential campaign of John F Kennedy.
Later, he worked with Presidents Bill Clinton and Barack Obama.
Five years after his wife's death, Mr Wofford met Mr Charlton.

Mr Wofford wrote: "Seeking to change something as deeply ingrained in law and public opinion as the definition of marriage seemed impossible.
"I was wrong, and should not have been so pessimistic.
"I had seen firsthand - working and walking with the Rev. Dr. Martin Luther King Jr. - that when the time was right, major change for civil rights came to pass in a single creative decade.
"At age 90, I am lucky to be in an era where the Supreme Court has strengthened what President Obama calls 'the dignity of marriage' by recognising that matrimony is not based on anyone's sexual nature, choices or dreams.
"It is based on love."

The Greatest Miracle of All Time! - The Quran